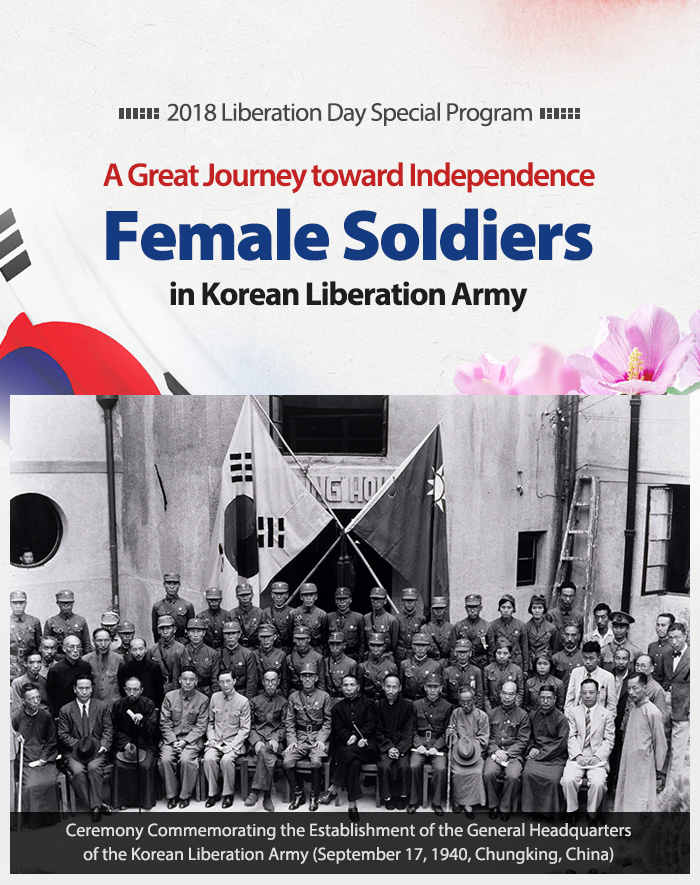 "This program started from an old photograph. The photo shows a ceremony commemorating the establishment of the General Headquarters of the Korean Liberation Army on September 17, 1940. A group of people in the photo includes four women in military uniforms, who turned out to be female members of the Korean Liberation Army. How did the women become military activists for independence and what did they do? Very little is known about their activities, which unfortunately were not recorded in history, either. But their activities were rooted in female independence activists’ fierce struggles that had continued since the late Joseon period. Let’s meet with some of the women soldiers and female freedom fighters who joined the great journey toward Korea’s independence."

O Gwang-sim [1910~1976]The independence fighter worked in the resistance movement against Japan in Manchuria. She joined the Korean Revolutionary Party in 1931. After 1940, she entered the Korean Liberation Army to engage in propaganda activities.

Ji Bok-young [1920-2007]As a member of the Korean Liberation Army, Ji belonged to the army’s third zone and recruited soldiers. She also participated in propaganda activities under the Korean Provisional Government.

Yoon Hee-soon [1860~1935]Yoon was the first leader of an all-female volunteer righteous army in Korea. She wrote many songs, including “Righteous Army Song for Wives,” to raise public awareness about anti-Japanese movement. She urged Korean women to play a central role in carrying out patriotic activities to save the country.

Nam Ja-hyun [1872∼1933]Nam participated in the March 1 Independence Movement in 1919. She fled to Manchuria and became a member of an armed organization for independence movement known as Seorogunjeongseo. Her anti-Japanese, pro-independence activities included an attempt to assassinate Makoto Saito, the Japanese governor general in Korea.

Cho Shin-sung [1873~1953]Cho was born in Uiju in North Pyongan Province. She organized an independence group in 1919 and devoted herself to the armed resistance against imperial Japan and fundraising for independence movement.

Ahn Gyeong-shin [1888~unknown]Hailing from Pyongyang, the independence activist shot a policeman to death in Ahnju, North Pyongan Province, and threw a bomb into the South Pyongyan provincial government building. She was five months pregnant at the time.