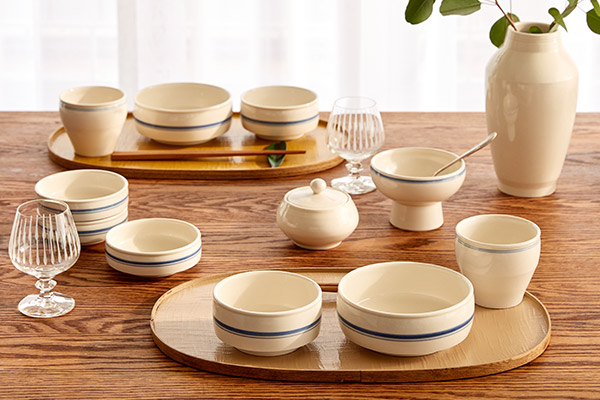 The Seoul Living Design Fair, Korea’s largest interior design event, was held at COEX in southern Seoul from April 3rd to 7. This year’s fair was bigger than ever, with more than 300 brands showcasing the latest trends in home furnishing, interior design and dining culture to some 286-thousand visitors under the theme “Making a Happy Home.”

Cheongsong Baekja has been participating in the Seoul Living Design Fair for nine consecutive years. It does not have any offline shop, but four pottery artists who learned from master potter Ko Man-gyeong(고만경) are working at a heritage center managed by Cheongsong County. Unfortunately, Mr. Ko passed away last year.

Cheongsong Baekja refers to white porcelain produced in Cheongsong, North Gyeongsang Province. Porcelain wares were used for about 500 years from the Joseon Dynasty to the mid-20th century, although production was temporarily suspended at times, including during the Japanese invasion in the late 16th century.

Cheongsong County has unearthed old kiln sites from the Joseon era and established a heritage center since it started a project to restore the tradition ten years ago.

Cheongsong Baekja was one of four major porcelains in the Joseon Kingdom. In the 1920s and the 1930s, the famous potteries indigenous to the small mountainous village of Cheongsong were sold to various parts of Japan, including the Mitsukoshi Department Store in Tokyo. Production stopped in the 1950s but this renowned cultural heritage of Cheongsong came alive again thanks to the late artisan Ko Man-gyeong, who had held on to the traditions of this particular porcelain.

Cheongsong Baekja is produced by using a finely grinded pottery stone called doseok. It is baked in a kiln where the temperature reaches 1,200 to 1,300 degrees Celsius. Artisans do not use any machines but craft the potteries by hand. In other words, rather than churning out cookie-cutter ceramics, they strictly follow the traditional methods of making porcelain, which we believe will enhance its value. Our regular customers are willing to wait for a month or even longer to receive the products they ordered. They no doubt fully recognize the unique value of the brand. We want to focus more on the traditional values of white porcelain than on mass production or profitability.

White ceramics produced in other areas are typically made from clay. On the other hand, Cheongsong Baekja uses white pottery stones, known as doseok, which is produced only in the Cheongsong region. Finely grinded doseok shows a clear milky white color. It is then sifted out repeatedly to produce the finest stone powder. Even preparing the basic material takes a lot of effort. Porcelain crafted in this way is extremely thin and light. The porcelain is so thin, like an eggshell that people the old days refrained from carrying it on their backs when crossing a stream or stepping stones for fear of breaking it.

While the whole production process is done manually in the same way potters did centuries ago, porcelain wares themselves never stay in the past. The Cheongsong Baekja Heritage Center has been dedicated to various research and development efforts to make baekja more accessible. For example, baekja products with modern variations are drawing an enthusiastic response from customers.

Unlike the past when many people would make do with simple food, young people these days tend to take great care of their food and the vibe, even when eating alone, as they highly value their personal time. In line with this trend, we have released various charming products, including a set of tableware. It turns out they are greatly popular, and most of our products are sold out every year.

Some customers upload videos featuring themselves eating food contained in Cheongsong white porcelain on Instagram and other popular social network platforms to demonstrate that even a single meal is valuable and that they are fully enjoying it. We’re glad to find that more and more people use Cheonsong Baekja as a means of increasing their level of satisfaction and quality of life.

Just as it was used by common people during the late Joseon period, Cheongsong white porcelain can serve as an everyday item. The brand releases various products tailed to modern lifestyles, including a set of tableware for one person. Tradition and modernity meets in the products which represent the beauty and elegance of Korean porcelain. As expected, Cheongsong Baekja created quite a buzz at this year’s Seoul Living Design Fair. 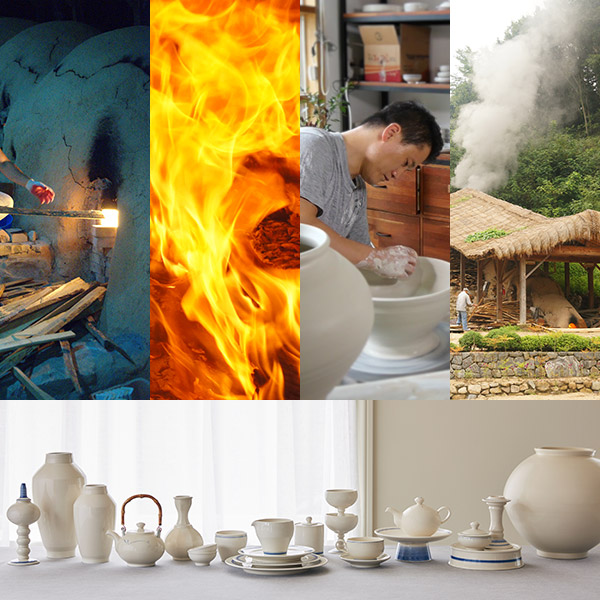 Starbucks Korea and Osulloc Tea House, a chain of Korean traditional teahouses, have shown interest in our teacups and made business proposals. We’re considering collaborating with companies like them to promote our products as Korea’s signature porcelain.

Cheongsong Baekja is created from rare materials collected from the region’s pristine natural environment. In contrast to conventional ceramics made from clay, the graceful ivory-colored porcelain shines like a pearl. The ultra-thin, light but solid porcelain wares featuring traditional designs are useful in daily life even today, as they were for hundreds of years. All these elements evoke the rich history and inspiring stories associated with the porcelain as well as the artisans’ enthusiasm and great devotion.

A large amount of Cheongsong white porcelain wares—large enough to be produced for the whole year—are sold out via pre-orders at the Seoul Living Design Fair. Just as in previous years, different companies and institutions in Korea and abroad proposed cooperation and exchange programs with the porcelain brand. Cheongsong Baekja is determined to uphold its unique, precious values that transcend time.

I believe Cheongsong Baekja embodies the aesthetics of slowness. Each and every artisan puts a great deal of effort into their work, from crushing stones to shaping and baking. Thankfully, more and more people are becoming aware of the worth of Cheongsong white porcelain. In fact, it is hard to find such a wonderful and subtle color anywhere in the world. We’ll continue to use the traditional method of producing the white porcelain to sustain its value, and we’ll do our best to satisfy customers who hold our products in high esteem.

This porcelain represents a strong artisan spirit and exquisite craftsmanship. Continuing the time-honored tradition of creating white porcelain from grinded stone, Cheongsong Baekja will grow into a premium brand that promotes Korean porcelain all over the world.