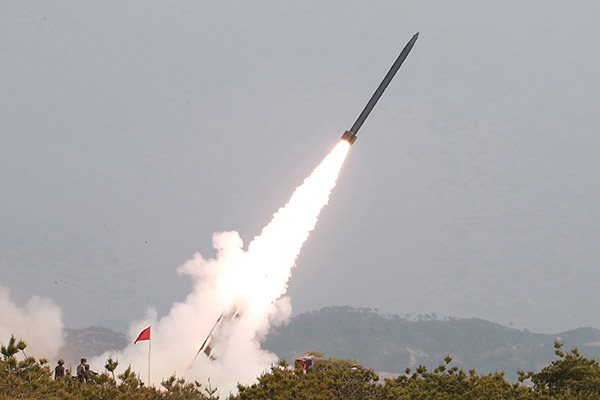 The stalled nuclear talks between North Korea and the U.S. have entered a new phase, as the North fired several short-range projectiles on May 4. If the projectile proves to be a missile, it would be Pyongyang’s first missile launch since November 2017 when it fired an intercontinental ballistic missile.

But the leaders of South Korea and the U.S. are refraining from criticizing North Korea and trying to instead manage the situation properly. The attention now turns to how regional diplomacy will unfold. With more, here’s Jin Hee-gwan, a professor of unification studies at Inje University.

North Korea has unveiled photos of its firing drills, which involved large-caliber 240 and 300 millimeter multiple rocket launchers and a new tactical guided weapon. Judging from its physical shape, the tactical weapon looks like a ballistic missile and it was launched vertically from a transporter erector launcher. But given its altitude and range, it appears to be something between a missile and a multiple rocket launcher. So it is difficult to be certain that it was a missile.

Moreover, the drills were attended by Ri Yong-gil, chief of the general staff of the North’s Korean People’s Army and Pak Jong-chon, a senior artillery officer, instead of Kim Rak-gyom, head of Pyongyang’s Strategic Rocket Forces, who always oversaw the nation’s previous missile test-launches. Kim’s absence suggests that the projectiles fired by the North were not missiles. South Korea and the U.S. are analyzing the projectiles to determine their details.

The Defense Ministry in Seoul told the National Assembly on Tuesday that North Korea had fired three types of weapons and that some of them showed an unusual trajectory, which the ministry was closely analyzing. It also said that it was hard to pinpoint whether some of the projectiles were short-range missiles.

The U.S. government has also defined the tactical weapon fired by North Korea as a “projectile,” maintaining a cautious attitude toward last week’s firing. U.S. Secretary of State Mike Pompeo said on Sunday that the projectiles were relatively short-range and added that his government had high confidence that they were not intercontinental ballistic missiles.

Both South Korea and the U.S. seem to be cautious about defining the projectiles, for fear that the firing may cause denuclearization talks to collapse.

If the projectiles launched by North Korea are defined as ballistic missiles, the firing is an act in violation of the U.N. Security Council resolutions. It means relations between North Korea and the U.S. as well as inter-Korean ties will regress to the phase of conflict and confrontation.

Both South Korea and the U.S. remain committed to solving the nuclear issue through dialogue. For the two countries, it would be undesirable to hastily define the projectiles as missiles and thus break the dialogue frame.

A missile refers to a self-propelled weapon system that has a range of hundreds or thousands of kilometers. Typically, missiles are classified as ballistic or cruise missiles. Projectiles, in comparison, include satellites, rockets and shells as well as missiles.

The U.N. Security Council currently bans North Korea from firing ballistic missiles. If the projectiles launched by the North are indeed missiles, the international community will inevitably have to respond to the provocation politically and diplomatically. This could derail the North Korea-U.S. dialogue itself, which has been at a standstill since the breakdown of the Hanoi summit in February.

North Korea is probably well aware of possible repercussions due to its show of force, so why did it push ahead with the projectile firing?

North Korea’s latest firing of multiple projectiles is seen as an ultimatum to the U.S. If things deteriorate, the North may go as far as to fire ballistic missiles, not just unidentified projectiles. Pyongyang is urging the U.S. to resume dialogue quickly to prevent the North from going to such extremes.

If North Korea really intended to break ties with the U.S. and return to a confrontational mode, it would have test-fired its Hwasong-15 intercontinental ballistic missile again. The North launched this missile on November 29, 2017. But Pyongyang has chosen to fire short-range projectiles, indicating that it has left room for talks.

North Korea’s latest move is interpreted as its determination not to back off from nuclear negotiations with the U.S. Pyongyang is trying to express its displeasure with Washington, which has been stepping up its pressure against the North, and to urge them to accept its demand for a phased approach to denuclearization. By launching short-range projectiles that will not pose a threat to the U.S., the North has made it clear that it wants to keep dialogue going. In other words, Pyongyang has resorted to a carefully-calculated, low-intensity provocation, while still keeping its talks with Washington intact.

Meanwhile, the leaders of South Korea and the U.S. held a telephone conversation on Tuesday, three days after Pyongyang’s projectile firing, to discuss how to respond to the North’s latest move.

The presidential office in Seoul says that Moon and Trump discussed the prompt resumption of denuclearization negotiations and shared the view on the importance of keeping North Korea on the dialogue track. It also appears that the two leaders discussed humanitarian aid for the North.

But their primary concern is how to induce North Korea to continue to engage in negotiations aimed at achieving a nuclear-free Korean Peninsula and settling permanent peace in the region. While analyzing the projectiles launched by the North, it is important for Seoul and Washington to maintain a favorable environment for Pyongyang to go through the denuclearization process.

In particular, Trump expressed his support for South Korea’s provision of food to the North, saying that it would be a very timely and positive move. As the two leaders saw eye to eye on the need for food aid for North Korea, “humanitarian aid” is emerging as another factor in the resumption of dialogue.

If the past is any indication, humanitarian food aid for North Korea has provided opportunities to contact the reclusive country. In the course of providing food aid, officials from international organizations visited North Korea to monitor and assess food distribution in the country. In the process, the North and the international community could develop friendly relations, which lead to other cooperation programs.

North Korea has officially told the U.N. that it will be short of 1.5 million tons of food this year, while the World Food Program has confirmed through its field survey that North Korea needs more than 1 million tons of additional grain to make up for food shortages this year. It seems pretty urgent to provide food aid to the North. As I said before, food assistance will certainly provide fresh momentum to renew relations between North Korea and the outside world, including the U.S. and South Korea.

The South Korean government said on Wednesday that it will cooperate with the international community to provide its northern neighbor with food aid, which will hopefully ease the nation’s food shortages.

But it is uncertain if North Korea will respond positively to food assistance, as what it really wants is sanctions relief. The two Koreas and the U.S. are making thorough diplomatic calculations to figure out what the other sides have in mind. Against this backdrop, it remains to be seen whether the offer for humanitarian aid will lead to a major breakthrough in resuming North Korea-U.S. negotiations as well as inter-Korean dialogue.