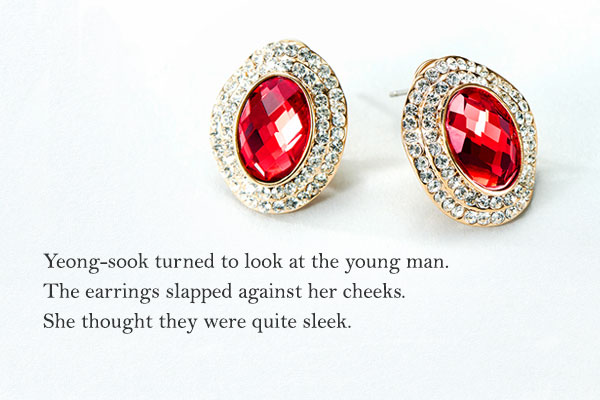 Joo Yo-seop’s “Madame Anemone” was published in literature magazine Jogwang, which translates to Morning Light, in 1936. The story begins with the scene in which the tearoom’s madam, Yeong-sook, appears with a pair of earrings for the first time.

The day Yeong-sook, the madam at tearoom Anemone, appeared behind the counter wearing her earrings, the regulars of Anemone admired the beauty of the violet earrings that danced whenever she moved her head.

Today Yeong-sook’s heart felt tight and throbbed nervously like that of a child who was caught stealing a candy. She frequently darted into the restroom to check her face, no, her earrings to be exact, reflected on the round mirror of her compact powder.

Joo Yo-seop is known as a writer who very accurately depicted the psychological and emotional states of women oppressed by the patriarchal society. Although Yeong-sook was a modern woman who runs a tearoom, she still hid her true feelings and couldn’t say out loud what she really thought. Her earrings spoke for her bottled-up emotions. For instance, when she felt the earrings were cold, she was feeling so embarrassed that her face became hot, and when she said her earrings were prickly, that represented her disappointment at realizing that she wasn’t the object of the young man’s affection. The last act of taking off the earrings symbolized her unrequited love and heartbreaking resignation.

Yeong-sook held the “Unfinished Symphony” record in her hands while waiting for the jazz record to finish. For some reason, tonight the young man was already lying prone on the table with his head buried in his arms.

Yeong-sook turned to look at the young man. The earrings slapped against her cheeks. She thought they were quite sleek.

: Debuted by publishing “A Broken Urn” on Maeil Sinbo in 1921

Awarded an Order of Merit for National Foundation in 2004, etc.