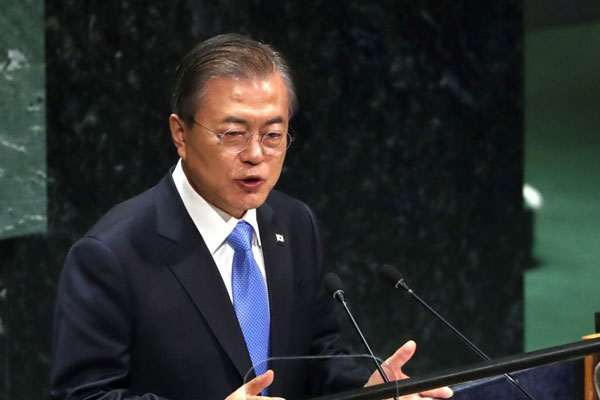 Asked about a potential third summit meeting with North Korean leader Kim Jong-, Trump said he first wants to know what would come out of the working-level discussions.

Highlighting that he maintains great relations with Kim, Trump downplayed Pyongyang's recent series of short-range ballistic missile launches, adding that they do not violate personal agreements Kim made with the U.S. .

"The two leaders agreed to continue their close collaboration to effectively deal with various challenges on the Korean Peninsula and in the region. They positively evaluated North Korea's willingness to resume dialogue, reconfirming that the spirit of agreements made at the Singapore summit still effective. The two exchanged opinions on ways to derive practical outcomes from the [upcoming] North Korea-US. -level talks. They reaffirmed their intention to end the hostile relations with North Korea that have lasted over 70 years and establish lasting peace on the Korean Peninsula."

According to the presidential office, however, the leaders did not get into the specifics of sanctions relief or security guarantees demanded by the North.

On the Seoul-Washington alliance, the leaders reaffirmed that it is a key pillar of regional peace and security that remains unshaken. The reassurance comes amid concerns of a possible rift between the two sides due to Seoul’s recent decision to pull out of a military -sharing pact with Tokyo against Washington’s wishes.

Ahead of negotiations to craft a new cost-sharing deal to support the stationing of U.S. on the Korean Peninsula, Moon reportedly told Trump that Seoul is open to shouldering a "reasonable and fair" level of costs.

"If we designate the area connecting Panmunjeom and in North Korea as a Peace and Cooperation District and transform it into a zone where both Koreas and the international community can jointly explore the path to prosperity on the Korean Peninsula -- and if the DMZ comes to house UN offices already stationed in the two Koreas and other international organizations related to peace, ecology and culture and emerge as a center for research on peace, , arms control and trust building -- it can become an international peace zone in name as well as substance."

During his speech at the UN General Assembly on Tuesday, the South Korean president introduced his blueprint for peace on the Korean Peninsula, reaffirming "zero tolerance for war" as an underlying principle.

"It has also become a symbolic space steeped in history, which embraces both the tragedy of division as embodied by the Joint Security Area, guard posts and barbed-wire fences as well as the yearning for peace. The DMZ is a common heritage of humankind and its value must be shared with the whole world. Once peace is established between the two Koreas, I will work together with North Korea to inscribe the DMZ as a UNESCO World Heritage Site."

The two Koreas are still technically at war as the North and the UN in 1953 only signed an armistice agreement. Serving as a buffer zone between the two Koreas, the four-kilometer wide demilitarized zone spanning east to west across the peninsula has ironically become a pristine green zone.

Seoul believes, however, that it would take 15 years to remove its planted in the DMZ.

During his speech, Moon also highlighted his "peace economy" initiative with North Korea, in which the two Koreas jointly contribute to economic development in East Asia.