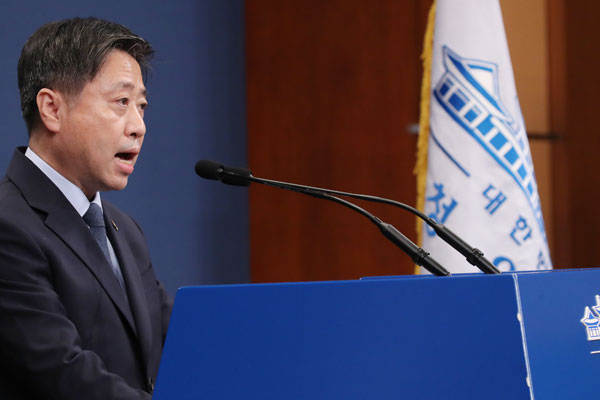 South Korea’s presidential office hit back strongly on Wednesday at North Korea’s criticism of President Moon Jae-in, going as far as saying its patience is wearing out.

"North Korea disparaged the president's remarks through the statement by First Vice Department Director Kim Yo Jong in a very rude tone with no understanding of the president's intent. We find this senseless."

"Such an act by North Korea fundamentally damages the trust between the leaders of the two Koreas, and we won't tolerate the North's unreasonable words and actions anymore."

"The recent remarks by North Korea do not help North Korea, and the North should take full responsibility for resulting situations. In particular, we hope that the North shows basic courtesy from now on."

At a meeting of top aides and in a video message released on Monday to mark the 20th anniversary of the landmark first inter-Korean summit, Moon said the Korean Peninsula hasn’t yet reached a place where the two Koreas alone can run forward as freely as they would like. But, the South Korean leader noted that there are definitely projects that South and North Korea can work together independently of the U.S.

Kim, who is vice director of the ruling Workers’ Party Central Committee, said in her statement that Moon's remarks evaded responsibility and were full of empty promises.

"North Korea also publicized unilaterally our unannounced offer to send a special delegate to the North to resolve this situation. This is an unprecedented, senseless act that intentionally distorts the intent of our offer. We express strong regret toward such an act (by the North)."

The South Korean spokesman admitted that the government made the offer, but said it was aimed at resolving the situation.

North Korea on Tuesday blew up the inter-Korean liaison office inside the Kaesong Industrial Complex just days after threatening to do so over Seoul’s handling of anti-Pyongyang leaflet campaigns.