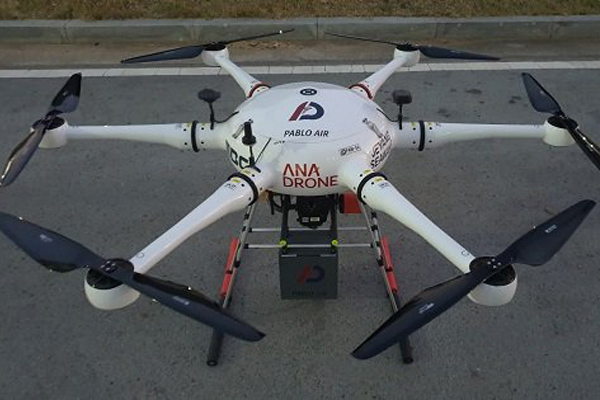 Today, we’re going to introduce PABLO AIR, a developer of drone solutions that can be applied to various areas, including logistics and entertainment. Let’s hear from company CEO Kim Young-jun(김영준).

Inspired by famous artist Pablo Picasso, the company name PABLO AIR contains its hope to become a creative and innovative firm. It is developing platforms for drone hardware and software as well as swarm flight platforms and drone delivery solutions. At the PyeongChang Winter Olympics in 2018, U.S. chipmaker Intel brought more than 1,200 drones to Korea and flew them simultaneously to showcase dazzling performances.

I was studying swarm flight technology at the time. After watching a foreign company promoting its drone technology in Korea, I thought similar technology could be developed locally. That’s when I made up my mind to set up my own company.

Kim dreamed of becoming a pilot when he was little and studied flight operations in college. Using his aptitude for aviation–related subjects and computers, he decided to explore the field of unmanned aerial vehicles or drones, in which market potential is nearly endless.

In fact, the global drone market is expanding year after year. Apart from military or entertainment purposes, drones can be used in a variety of areas including surveillance, measuring, delivery and transportation. PABLO AIR is focused on the  delivery of goods, in particular. 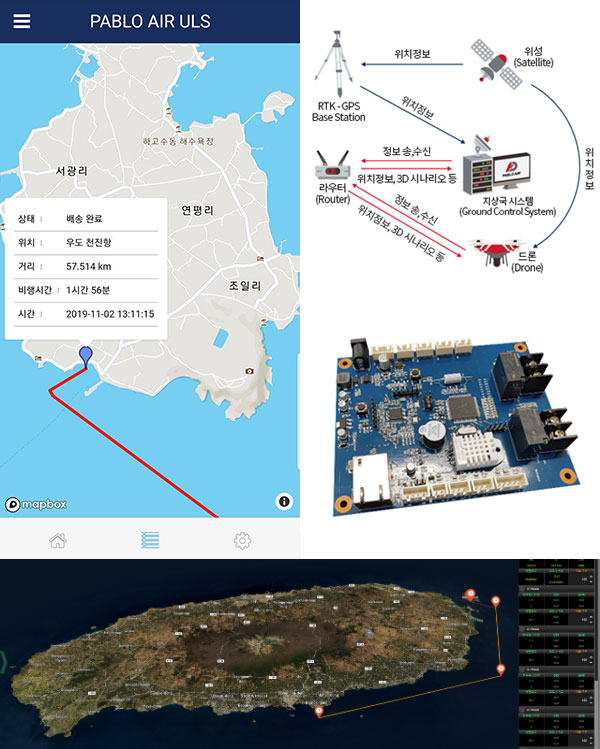 Our drone solutions can be used in two major areas. One is for delivery and the other is for drone art shows. Speaking of delivery, demand for delivery services has increased sharply due to the COVID-19 pandemic. Goods can be delivered on roads, of course, but also using skies. It takes one or two days for residents on islands to get things delivered from the mainland. If boats are not in operation, they can’t receive the goods. But using drones, we can probably deliver things in an hour to islanders.

Based on our swarm flight technology, we will also be able to send goods to multiple islands at the same time. We’re working on this innovative drone delivery platform, with the goal of completing it by March 2022.

Tech giants such as Google and Amazon have already aimed at the drone delivery market, with demand for drone delivery rising fast in the U.S. this year due to the pandemic. In Korea, efforts are underway to use drones when delivering products to remote islands and mountainous areas.

PABLO AIR is recognized as a pioneer in drone use when delivering goods to such hard-to-access locations. Last year, the company successfully conducted a long-distance drone delivery over the sea from Seogwipo Port on Jeju Island to Cheonjin Port on Wudo Island. It set the record for the longest time and distance drone delivery in Korea by covering a distance of 57.514 kilometers in 1 hour and 56 minutes. Apart from its drone delivery technology, the company’s swarm flight technology is also ranked number one in Korea.

I’d say we boast Korea’s best swarm flight technology. We’ve received multiple prizes, including the SMEs and Startups Minister award, as well as the Air Force Chief of Staff award. We’re also expected to win the Science and Technology Minister award in December. We’ve applied for 15 patents, including nine in Korea. As a matter of fact, it isn’t easy for any drone company to apply for a patent as drone solutions require complicated technology.

Thanks to our graduate and doctoral researchers in aerial technology, we’ve been able to apply for as many as 15 patents in just two years since the company’s establishment. I believe this proves our technological prowess.

PABLO AIR’s technology is recognized in other countries as well, as it exported its swarm flight platform to the Middle East, Europe and South America last year. The spectacular drone art show exhibited at the 2018 PyeongChang Olympics is based on this swarm flight technology. In a drone art show, multiple drones should move precisely in the air without bumping into each other. The swarm flight platform developed by PABLO AIR is capable of controlling hundreds of drones simultaneously. Using this technology, the company showcased a fabulous drone art show in Seoul in September, at the request of the fan club of K-pop superstar BTS. The show was intended to celebrate the birthday of one of the members of the boy band.

PABLO AIR is also planning a show that combines a drone art show and a fireworks display. Compared to fireworks, a drone light show can offer a more sophisticated presentation and has a low risk of safety-related accidents. For these reasons, drone light shows can be used in different kinds of festivals.

PABLO AIR’s research and challenges do not end here, though. In addition to the delivery of goods and swarm flight, the company has been spurring efforts to develop an air taxi service.

We’re not making an air taxi but we’re working on software to control them. Our goal is to develop a ground control system and combine it with air taxis so pilots of drone taxis can use our service safely and conveniently when traveling in the air.

Our company is located in Songdo, Incheon. It takes one or two hours to get to Seoul. An air taxi would only take 20 minutes. If a person living in a remote island wants to eat food offered by a restaurant in a city, he or she must go all the way to the city or order the food and wait for a couple days. But with a drone, packaged food can be delivered to his or her home in an hour.

Air taxis are cited as a new transportation means to transcend the limits of traffic infrastructure and to overcome environmental issues like air pollution and noise. Industry watchers predict that air taxis will be deployed on a commercial scale between 2023 and 2025. The air taxi market is expected to expand fast in 2035 at the latest. Once the relevant industrial ecosystem is formed, the global air taxi market is forecast to reach 730 trillion won or roughly 660 billion US dollars in 2040. PABLO AIR is making preparations to help everyone enjoy the benefit of the future, which seems to be rather difficult to imagine right now but will come about soon.

While Pablo Picasso was an original and innovative painter who also raised serious social issues, we aim to resolve such issues. This is another meaning of our company name, PABLO AIR. Our goal is to become a leader in the global drone market, whether our drone technology is used for delivery services or air taxis. We hope to create convenient services that will be easily accessible by people.

Drones were developed for military purposes at first but they have been applied to various other fields quickly. They are described by some as “a second semiconductor” that could determine national competitiveness. In an effort to catch up with industry leaders, the Korean government included drones in eight key sectors for growth and invested 92.6 billion won or 84 million US dollars in drone research and development this year.

Innovative R&D efforts, coupled with government support, will surely enable Korea to secure global competitiveness in the drone area in the not-so-distant future.