President Hopes for Normal Trajectory Growth in 1st Half of 2021 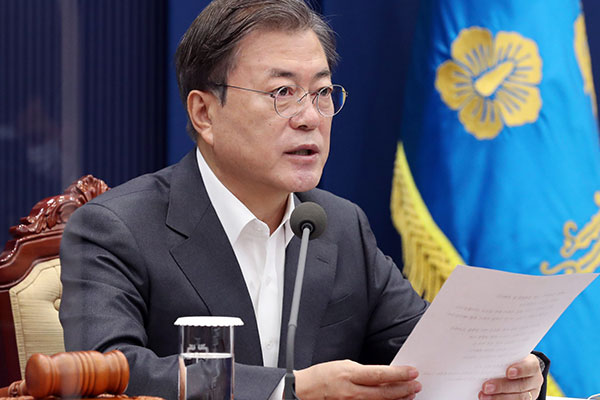 The Bank of Korea said Tuesday that South Korea’s economy grew more than two percent in the third quarter on the back of a rebound in exports amid the COVID-19 pandemic. President Moon Jae-in took note of the positive indicators and called for the support of related ministries and the National Assembly to keep up the momentum.

President Moon Jae-in expressed hopes that by the first half of next year, the country would recover from the impact of the pandemic and re-enter a normal trajectory of growth.

"The economic rebound that started in the third quarter is going strong in this last quarter. Business sentiment has improved notably. Both consumer sentiment and business survey indexes have markedly improved and the November economic sentiment index has recovered to pre-COVID levels.”

At a Cabinet meeting Tuesday, President Moon cited better-than-expected third-quarter GDP growth numbers announced earlier in the day by the Bank of Korea.

According to the central bank, the country's real gross domestic product(GDP) grew two-point-one percent in the July to September period from the previous quarter, the highest third quarter growth since 2009.

Moon also said an effective economic response was the driving force behind the swift recovery and rebound and called on cooperation from the National Assembly in passing the budget bill, adding it is necessary for economic recovery.

“I also call for the wisdom and efforts on the additional budget that is needed to secure vaccines, provide tailored financial support for COVID-19 victims, and make preemptive investment for the proposed carbon neutrality by the year 2050.”

In addition, the president said the KOSPI topping 26-hundred last week, an all-time record, shows that investors at home and abroad have a positive outlook for the Korean economy.

He called on the related ministries to make concerted efforts to usher in an all-out rebound.

The Bank of Korea also announced Tuesday that South Korea's exports grew in November by four percent from a year earlier, bouncing back just one month after a decrease of three-point-eight percent.

The benchmark Korea Composite Stock Price Index(KOSPI) broke the two-thousand-700 threshold for the first time ever as foreign investors continued to snap up blue chip stocks Samsung Electronics and SK Hynix on Friday.

Hitting a record high for the fourth day in a row, the main bourse rose 35-point-23 points, or one-point-31 percent to close the week at two-thousand-731-point-45.