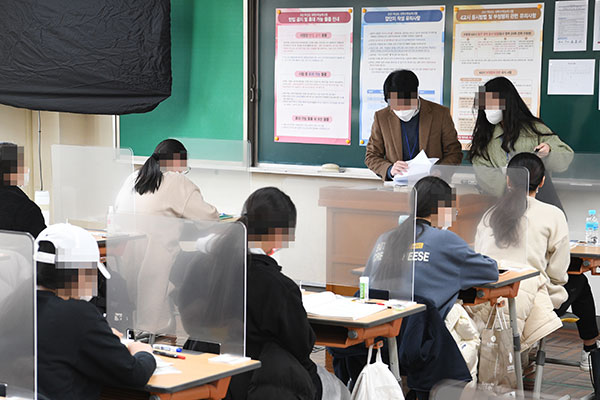 The annual College Scholastic Ability Test(CSAT) was held at nearly 14-hundred test sites across the nation on Thursday, amid the third wave of the COVID-19 pandemic.

Initially, the annual exam was set to be held on November 19 but was postponed by two weeks after schools pushed back the beginning of the first semester to April due to the COVID-19 pandemic.

About 493-thousand people applied for the test this year, down some ten percent from last year. The figure is the lowest to be posted since the CSAT was introduced in 1994.

Test takers who are in self-quarantine were able to take the test at about 110 separate venues while those infected with the virus took the test at some 30 medical facilities under supervision.

Among the 490-thousand-992 applicants for theCSAT, 426-thousand-344 were present at their test sites before the beginning of the first test session, according to the Education Ministry and the Korea Institute for Curriculum and Evaluation(KICE).

That translates into a record-high absence rate of 13-point-17 percent.

The high absence rate could be a burden on those who took the test as it will lower the proportion of people who score the highest marks. Nine different grades will be assigned to test-takers, with those whose scores are within the top four percent receiving the highest marks.

Test-takers will be informed of the results on December 23.