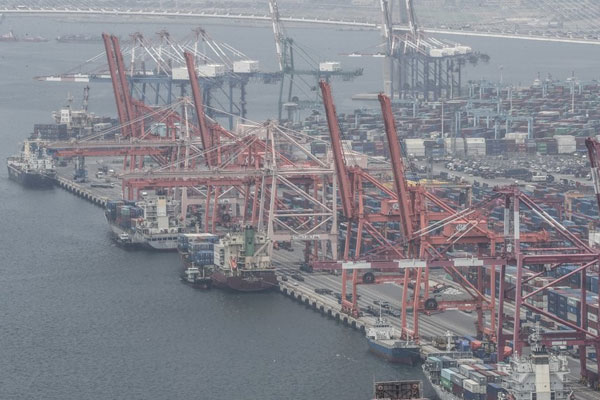 The Organization for Economic Cooperation and Development or OECD has slightly cut its outlook for South Korea’s economic growth this year, reflecting the fallout of the recent resurgence of COVID-19 in the country. But the projected growth for Korea is higher than that of any other OECD member, just in the organization’s previous forecast in September.

Meanwhile, Korea’s unemployment rate this year is estimated at 3.8 percent, which is lower than that of other major economies but is still higher than the country’s previous records. The percentage is expected to decline slightly next year.

The OECD notes that the Korean government’s massive fiscal support stimulated consumption to some extent, and semiconductors contributed to a recovery in exports.

Underlining Korea’s effective measures to contain the spread of COVID-19, the OECD said that the Korean economy is expected to contract by the smallest margin this year among its 37 member countries. In the group of G20, South Korea is second only to China, in terms of 2020 economic growth.

The OECD’s growth outlook for Korea is similar to that of other financial institutions. Last month, the Bank of Korea revised up its growth forecast for Korea to a 1.1 percent retreat from its previous projection of a 1.3 percent contraction. The Korea Development Institute and the International Monetary Fund predicted that the Korean economy would contract 1.1 percent and 1.9 percent, respectively. Overall, financial institutions have put Korea’s 2020 growth outlook at the negative 1 percent range.

Back to the recent OECD report, the organization revised down its growth forecast for Korea next year to 2.8 percent.

The downward adjustment reflects the concerns that the resurgence of COVID-19 in recent months may affect domestic demand next year. The coronavirus is spreading fast again, especially in the U.S. and Europe. This is bad news for Korea’s exports and growth momentum.

The Korean government’s fiscal spending has played a crucial role in fending off an economic recession this year.

But this role might be reduced next year, while the financial burden will likely lead to a steady rise in interest rates. These factors could be detrimental to growth.

Meanwhile, the OECD forecast that the global economy will retreat 4.2 percent this year, up 0.3 percentage points from its September estimate of a 4.5 percent contraction. The OECD believes that the world economy is showing signs of recovery, thanks to massive support by governments and central banks, although it was mired in a deep recession in the second quarter of this year in the wake of the pandemic. The OECD also slightly raised its growth outlook for some major economies.

The upward revision of global economic growth reflects the effects of active expansionary fiscal policies and strong pump-priming measures. It also represents the expectations that growing hopes for vaccines will ease people’s concerns about the virus and encourage them to engage in more economic activities.

The growth outlook for the U.S. was lifted to minus 3.7 percent from the previous 3.8 percent contraction. Meanwhile, China is expected to be the only major economy to post positive growth this year, with its economy expanding 1.8 percent. The growth forecast for the eurozone economy, which has been hit hardest by the pandemic, was also revised up to a 7.5 percent contraction from negative 7.9 percent.

Despite the modest recovery trend in the global economy, the OECD slashed its growth forecast for next year to 4.2 percent from its September update of 5 percent, citing new waves of COVID-19 infections in the U.S. and Europe in the fourth quarter. The OECD predicted that only five of its members, including South Korea, would see their GDP level return to the pre-pandemic level next year. The other four countries are Norway, Turkey, Lithuania and Sweden.

On December 1, the Bank of Korea announced that the Korean economy grew more than 2 percent in the third quarter. This is a significant turnaround, considering the previous two straight quarters of contraction. If this positive trend continues until the year’s end, Korea’s economic growth this year will reach a level similar to the projections by the OECD and Korea’s central bank. In this COVID-19 crisis, growth in the negative 1 percent range is considered a relatively good performance.

Negative growth, the first of its kind for Korea since the Asian financial crisis in the late 1990s, will come as a shock to the local economy, of course. But the impact is far weaker than the one experienced by the U.S. and eurozone economies. The service sector has been severely affected by the pandemic, as people have been discouraged from traveling. That’s why the pandemic-driven downturn has taken a heavier toll on European countries. Korea, on the other hand, is a manufacturing powerhouse. Also, technologies related to the fourth industrial revolution continue to draw investment. In this sense, semiconductors and display products continue to prop up the Korean economy, which I think is greatly significant.

Still, analysts say that it is too early to conclude that the Korean economy hit bottom in the second quarter. That’s because the economic rebound in the third quarter seems to reflect the base effect from the worst contraction in the previous quarter as well as the effect of stimulus measures, including disaster relief funds. Moreover, uncertainties still linger in the Korean economy and the global economy alike.

The possibility of the further spread of COVID-19 is a major factor that will influence economic growth around the world. There seems to be some progress in vaccine development, but it is still uncertain how quickly and effectively vaccines will be distributed to help normalize economic activities. It is also urgent to develop treatment drugs as well.

If the pandemic is protracted further, it will be difficult for the global economy to grow. Risks like this still remain.

In its latest report, the OECD said, “For the first time since the pandemic began, there is now hope for a brighter future.” While COVID-19 may spread again regionally, the report holds an optimistic view that the global economy can keep recovery momentum going, on the back of the distribution of vaccines and treatments.

The Korean government will have to devise policies to effectively manage the economy, which has only begun to show signs of a modest recovery.