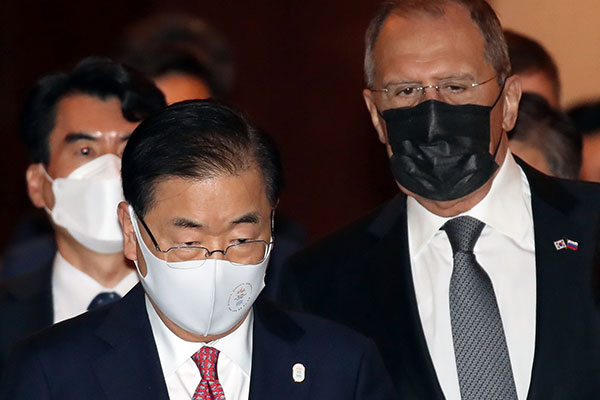 North Korea's missile launch came as Russian Foreign Minister Sergey Lavrov is visiting Seoul for ministerial talks. Coming to Korea to mark 30 years of diplomatic relations between South Korea and Russia, which the two sides couldn't celebrate last year due to the pandemic, the top diplomat from Moscow had to spend more time discussing North Korea than was initially expected.

"We expressed (during the meeting with Russia) deep concerns over North Korea's latest firing of what appears to be short-range ballistic missiles amid our government's various efforts to achieve the goal of complete denuclearization of the Korean Peninsula early."

During the joint news conference, Minister Lavrov called for a swift resumption of dialogue to resolve the standoff with North Korea.

"I emphasized the importance of the effort to maintain peace and stability on not only the Korean Peninsula but also in the northeast Asia region. This effort includes the suspension of the arms race and all kinds of military activities from all related nations."

The Seoul-Moscow foreign ministerial meeting in Seoul was the first since 2009 and came after tensions flared due to North Korea's missile launches earlier in the morning.

During the meeting, the South Korean foreign minister called Russia a partner for regional peace while touting progress in bilateral exchanges since the establishment of relations between the two countries in 1990.

He stressed that both sides should closely cooperate to strengthen communication and people-to-people exchanges despite the difficulties caused by the COVID-19 pandemic.

Lavrov’s Seoul trip on the heels of a similar visit to to China has developed geopolitical overtones. The U.S. is pushing to “reinvigorate and modernize” its regional democratic alliances while China and Russia are closing ranks.