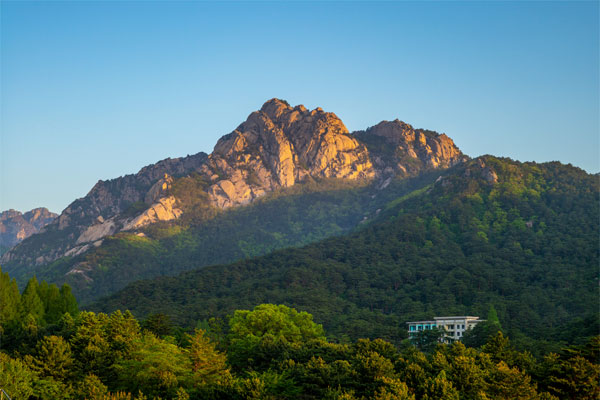 Satellite images show that North Korea, since March, has been tearing down Haegeumgang Hotel owned by South Korea at the Mt. Geumgang resort. It also appears that the North demolished a golf resort also built by South Korea in the area in April.

North Korea has reportedly dismantled a considerable part of South Korean facilities at Mt. Geumgang without consulting with the South.

Today, we’ll learn about how this scenic mountain has been perceived in North Korea and how the inter-Korean Mt. Geumgang tourism project has evolved from Oh Sam-eon, researcher at the National Institute of Forest Science.

This song titled “Longing for Mt. Geumgang” starts with the lyrics, “Who created this beautiful mountain? We’re longing for those silent 12-thousand peaks.”

Known for its beautiful scenery, Mt. Geumgang has been regarded as one of the two most famous mountains in Korea, along with Mt. Baekdu.

According to North Korea records, various plants including subtropical and polar ones grow at the mountain. There are two-thousand-260 plant species, including 100 indigenous to the mountain. 38 kinds of beasts, 130 types of birds, nine kinds of reptiles, ten kinds of amphibians and 30 fish species are found at the mountain.

Mt. Geumgang’s highest point, Biro Peak, is one-thousand-638 meters above sea level. The mountain stretches from the northern part of the Taebaek mountain range that runs along the east of the Korean Peninsula to Goseong County in Gangwon Province.

One of North Korean folk songs titled “Scenery is Good, Living is Also Good” shows that the country takes great pride in Mt. Geumgang. The lyrics of the song are engraved on the rock at the mountain.

North Korean data show that some four-thousand-500 letters are engraved on 80 rocks at the mountain. The letters are about writings, hymns of praise and slogans. Those rocks are called slogan rocks.

Mt. Geumgang has many episodes about Kim Jong-suk, the wife of North Korean founder Kim Il-sung and the mother of Kim Jong-il. South Korean company Hyundai Asan remodeled Oegeumgang or Outer Geumgang Hotel at the mountain in 2006. Actually, the name of the hotel was originally the Kim Jong-suk Resort.

North Korea explains that the resort was named after Kim Jong-suk because the facility contains the anti-Japanese heroine’s sublime aspiration to provide adequate living and cultural conditions for the people.

A children’s song “Mt. Geumgang” is familiar to South Korean people. The song was written by author Kang So-chon, whose hometown is in South Hamgyong Province in North Korea.

Part of the lyrics of the song says, “The mountain changes into beautiful clothes every season.” As the lyrics indicate, Mt. Geumgang has different names for each season. Geumgang is the name for the spring, when the mountain is full of new green shoots and flower blossoms. The mountain is called Bongrae in the summer, when shades of green cover the peaks and valleys, Pungak in the fall, when the mountain’s 12-thousand peaks glow with autumn tints, and Gaegol in the winter, when the leaves are gone and rocks are revealed like bones.

There are some folktales associated with Geumgang Mountain. The most popular one is “The Fairy and the Woodcutter” against the backdrop of Sangpal Ponds at the mountain. Legend has it that the water in the ponds was so clean and the scenery was so beautiful that fairies would come down from the heaven to bathe in the ponds.

North Korea changed the plot and conclusion of the folktale to recreate it as a movie, dance or opera. For example, a children’s story “Geumgang Fairy” written by Han Sorya portrays a fairy who ascended to the heaven misses Geumgang mountain so much that she comes down to the earth again and lives happily, working hard, in the human world, as she did before. A dance performance with the same title has a similar plot.

The dance drama has a different conclusion. The fairy and her seven other fellow fairies all decide to live in the human world, fascinated by the spectacular scenery of Mt. Geumgang. Experts say the dance drama modernized the legend about eight fairies at Mt. Geumgang and expressed Koreans’ ethic characteristics well. It emphasizes that the mountain is an earthly paradise that is even better than the heavens. It also highlights the dignity of labor.

The late Hyundai Group founder Chung Ju-yung, whose hometown is in North Korea, signed an agreement with the North on the Mt. Geumgang tour program in 1989. Nine years later, in October 1998, Chung drove a herd of cattle to North Korea and returned home, bringing an inter-Korean agreement on the tour project with him.

At the time, North Korea also showed great interest in Chung’s visit to the North and made it clear that the tour program is a cooperation project between the two Koreas.

The tour program grew in scale year after year. An overland tour was launched in 2003, allowing South Korean tourists to travel by road to North Korea. The following year, day trips as well as two-day and three-day trips were introduced. The accumulated number of tourists to the mountain surpassed one million in June 2005, seven years after the start of the tour program. In 2008, the number neared two million.

To celebrate the occasion, KBS held its Open Concert on a special outdoor stage in the front yard of the Onjong Pavilion at Mt. Geumgang.

In July 2008, an unexpected incident put a brake on the tour program.

In 2011, North Korea cancelled Hyundai Asan’s exclusive right to operate the tour business and adopted the Law on the Mt. Geumgang Special Zone for International Tourism to exclude South Korea from the tours. In 2014, the North announced an ordinance concerning the creation of the Wonsan-Mt. Geumgang International Tourist Zone.

The Law on the Mt. Geumgang Special Zone for International Tourism states that tourism includes mountain climbing, sightseeing, sea bathing, rest, experience, entertainment, sports and therapies, and tourists can freely travel around within the special zone. Interestingly, North Korea permits a casino business, which could be regarded as one of the symbols of capitalism.

North Korea is constructing the Wonsan-Kalma Coastal Tourist Zone, a beachside resort along the east coast. The completion of the project, initially scheduled for April 2020, has been postponed indefinitely, due to international sanctions on North Korea and the COVID-19 pandemic.

Unfortunately, North Korea’s tourism project did not proceed as planned. But the atmosphere changed quickly during the inter-Korean summit in Pyongyang in September 2018, when South and North Korea agreed to normalize the suspended Gaeseong Industrial Park project and the Mt. Geumgang tour program as soon as conditions are met.

North Korean leader Kim Jong-un also expressed his intention to resume Mt. Geumgang tours without any condition in his New Year’s message in 2019.

On April 27, 2018, then-South Korean president Moon Jae-in and North Korean leader Kim Jong-un shook hands with each other at the Peace House in the truce village of Panmunjom. The historic scene was broadcast live worldwide. A large landscape painting of Mt. Geumgang, measuring 681 centimeters wide and 181 centimeters high, was hung on the wall in the meeting room of the Peace House. It seems the two sides hoped that Mt. Geumgang would be a symbol of inter-Korean reconciliation and cooperation. We sincerely hope their wish will come true.