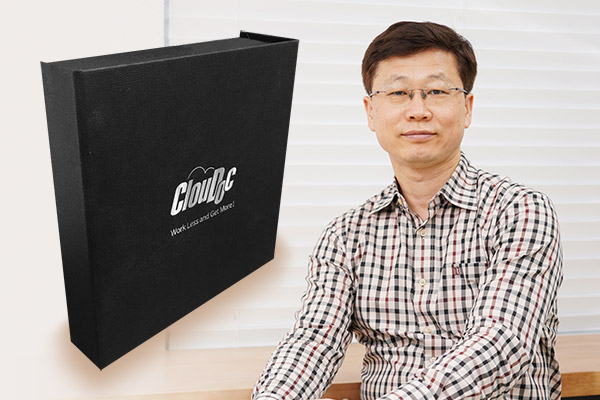 The company has developed and provided a document centralization solution called ClouDoc since it was established in 2002 under the name Net-ID. It has been renamed mcloudoc, which refers to a cloud service based on ClouDoc.

I majored in computer software in university and studied IT security and the distributed operating system for my master’s program. Then I worked at Hyundai Electronics’ Software Research Institute and at Korea Microsoft for about nine years before setting up my own company in 2002. The goal of the company was to become a developer and provider of packaged software to be used by many corporate customers both here in Korea and abroad.

While mcloudoc is a market leader now, it got off to a rocky start. As an experienced software expert, Yoo jumped into the IT industry with confidence. First, he came up with a smart card security solution, which he believed would attract many users. Contrary to his expectations, however, six-month sales remained at a mere two million won or about 1,800 US dollars.

Having accumulated experience and technology in the webhard market, Yoo recognized the importance of managing the ever-increasing amount of data and ensuring their security. He sensed that a new market would appear, and his prediction turned out to be correct.

The concept of “document centralization” was introduced in Korea for the first time in the world. Korea’s leading steelmaker POSCO was the first company to adopt this concept in 2010. Company workers were all banned from storing documents in their personal computers but were required to save them only in the company’s central drive. In doing so, the company was able to block internal employees and partners from leaking information and strengthen collaboration instead based on centralized documentation. mcloudoc was the first firm to claim that a document centralization service could replace previous security solutions, and it drew an enthusiastic response from customers.

We started developing webhard solutions in 2002. We thought that one of the most important functions customers wanted to use would be viewing documents stored on the webhard server directly from a Windows Explorer drive. The Windows Explorer drive technology, which the company developed on its own, played a key role in the successful introduction of our document centralization solution.

In general, about 90 percent of company documents, including confidential ones, are stored in PCs or notebooks of employees. If an employee leaks the information in his or her computer after leaving the company, or if outside hackers steal the information, the company’s key documents might end up in the wrong hands.

To block information leakage, POSCO carried out a bold innovative measure in 2010 to build a document centralization system, in which all documents are kept safe in the company’s central drive.

Other companies such as LG Display and Samsung Electronics followed suit, spurring growth in the document centralization service market.

Having already predicted this major change, Yoo offered a self-developed solution, which was the first of its kind in Korea. Reflecting customer demands, the solution provides a personal document drive as well as a team document drive to simplify complicated office procedures. Functions like this certainly distinguish the company’s solution from alternatives and the firm has continued to make pioneering attempts.

We were also the first Korean firm to adopt a measure to deal with ransomware attacks effectively. We’ve recently applied a big data analysis solution to document centralization, also the first such case.

Regarding ransomware blocking, mcloudoc offers four-step countermeasures. It automatically copies documents and stores them before ransomware encrypts the files, so most of the encrypted documents can be recovered.

Thanks to the company’s proactive response to the market, more than 50 new customers introduced this solution for six years in a row from 2014 to 2019. This year, we plan to unveil a new document centralization solution featuring artificial intelligence for the first time in the industry. In this way, mcloudoc is responding preemptively to new technology issues and taking the lead in setting industry standards.

Ransomware, a combination of ransom and software, is malicious software that restricts user access to a computer system or data and demands money to unlock it. The document centralization system can respond against ransomware threats, as files do not remain in personal computers but are transferred to the central server for management. The system itself is effective in ransomware blocking, but mcloudoc was not satisfied.

Taking things one step further, the company provided multi-step countermeasures against different ransomware attacks and developed a way to block ransomware infections in documents being edited.

Claiming the top spot in the document centralization solution market in Korea, the company has also been exploring overseas markets for the last ten years. 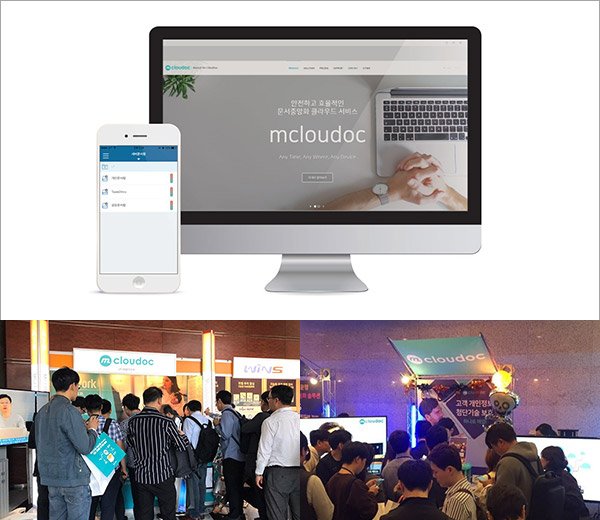 The company has participated in exhibitions in foreign countries, including Japan, Singapore, Vietnam and China. Some Japanese firms and Korean companies doing business overseas use mcloudoc to prevent information leakage. I think we’ll be able to export our solutions in a more stable way within ten years if we cooperate with partners abroad more systematically.

We’ll join an exhibition in Osaka in January and another one in Tokyo in May. In Osaka, we’ll awaken small-and mid-sized companies to the need to prevent high-tech information leakage, while in Tokyo, we’ll draw attention to the so-called “telework” environment. Korean software makers are faring well in Japan, so I’m sure we can produce a good result if we make constant efforts to tap into the Japanese market.

Document centralization solutions first started in Korea. For that reason, many remain skeptical about the solutions’ success in other countries. However, mcloudoc has been expanding its export destinations since it first signed a contract with a Japanese firm in 2009. This year, it plans to reach out to many more customers in wider markets, starting from exhibitions in Japan.

The company has tried to become an honest software developer since its foundation. It is the company’s entrepreneurial spirit. We’ll move beyond the domestic market and advance into the global one eventually.

We’ll listen carefully to customers to develop new solutions that have never been tried by anyone. We hope to contribute to enhancing corporate security and productivity. This is why the company exists and what it is aiming for. Based on our entrepreneurial spirit, we’ll be always honest with customers and identify with them.