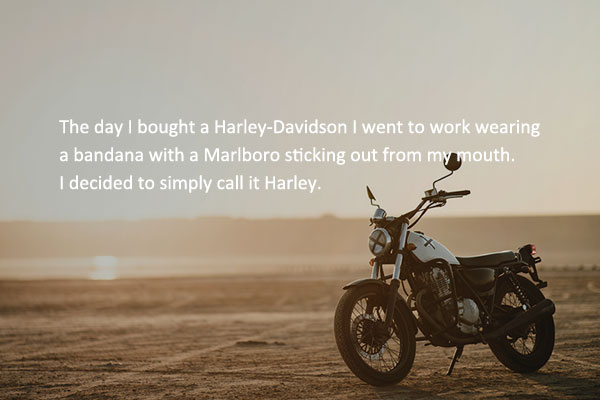 The day I bought a Harley-Davidson I went to work wearing a bandana with a Marlboro sticking out from my mouth. I decided to simply call it Harley.

Seeing me in my outfit, Director S of my department was left speechless and just gawked at me.

I took out a letter of resignation and threw it on his desk. And I put out my cigarette on top of that letter. I thought that was what a Harley rider should do.

Mothers living in the main character’s apartment complex generally want their children to go to top universities and get jobs in big corporations.

Around that time, the main character got a dog. Its name was Palpari, meaning eighty-eight. It was a popular name as the whole country was excited over hosting the 1988 Olympic Games.

My pornographic tape, shattered to pieces, ended up in a dumpster. Around the same time, my mother, unable to tolerate Palpari’s howling any longer, took him to a veterinary clinic and had him neutered. I gave him a warm hug for the first time.

I thought the dog that had to live the rest of its life with a non-functioning genital was much like myself who now had to please myself with only my imagination, without the help of an X-rated tape.

Korea is known for its high educational standards. More accurately, its educational fervor for teaching children how to become successful. The main character, following the wishes of his parents, went to good college and got a good job. He lived his life following the path and regulations set by the world. But one day he decides to find freedom. The main character’s Harley-Davidson motorcycle symbolizes his quest for freedom and his desire to deviate from the norm.

: Debuted by winning the New Writer’s Award in 2009