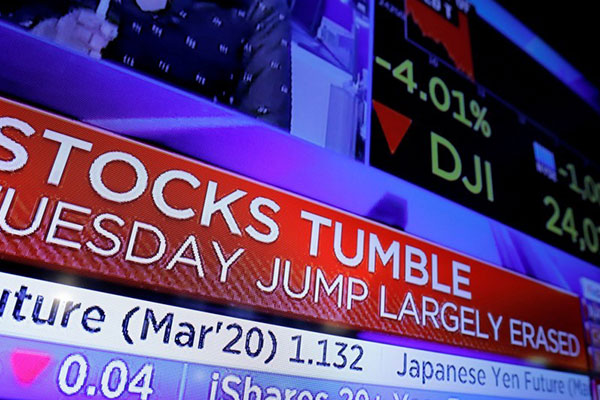 World markets are having flashbacks of 1987's "Black Monday" crash as stocks experience their most precipitous drops in 33 years.

The Dow Jones Industrial Average closed two thousand-352-point-60 points lower, or nine-point-99 percent, at 21-thousand-200-point-62 on Thursday. This was just four days after it plunged seven-point-79 percent on Monday.

U.S. news outlet CNBC said it was the worst day of trading since 1987's "Black Monday," when the Dow fell 22-point-six percent.

The S&P 500 and Nasdaq also fell by more than nine percent on Thursday.

According to the U.S. media, U.S. President Donald Trump was expected to offer an aggressive response to the COVID-19 pandemic in his televised address from the Oval Office on Wednesday, but what he said wasn't enough to calm markets jittery over the virus.

Major European markets also fell by more than ten percent on Thursday due to COVID-19 fears, the U.S. travel ban on Europe and disappointment in the European Central Bank's decision not to cut interest rates.

The South Korean stock market plunged around three and a half percent on Friday amid coronavirus fears after a rollercoaster session.

The Korea Exchange activated trading curbs – circuit breakers and a sidecar -- on the main and the secondary markets after they fell over eight percent in the morning.

As the country’s stock market continued its nosedive, President Moon Jae-in presided over a special meeting with the country's finance minister and central bank chief to discuss countermeasures amid a panic in the domestic and global financial markets triggered by the coronavirus pandemic.

A possible increase in the government's eleven-point-seven-trillion-won extra budget bill submitted to the National Assembly to fight the virus and minimize the economic fallout is also expected to have been discussed.

The Bank of Korea, meanwhile, is considering whether to hold an emergency session to cut its benchmark rate.