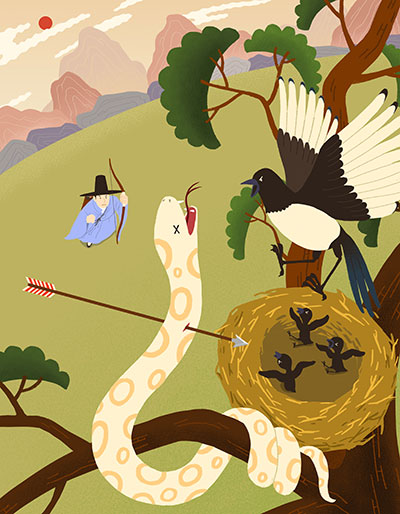 Once upon a time, in a village deep in the mountain, lived a man whose name was Mr. Kim. He was on his way to Hanyang to take the government exam when he sat down by the stream to take a get some rest.

A large serpent was climbing up a tall tree where two magpie chicks were crying in their nest.

“That serpent is going to eat those little birds. I’d better help them.”

Mr. Kim took out his bow and arrow and took a shot at the serpent.

The parents of the two magpie chicks kept bowing to the man in gratitude.

“Sir, thank you for saving our children. We will never forget your kindness.”

Mr. Kim said goodbye to the birds and went on his way. But it grew dark soon, and he saw a light flickering not too far off. He stood up and walked toward the light to find a house.

The door opened after a while. Behind the door was a young woman dressed entirely in white.

The young woman showed him to a room. Being full from a proper meal and covered in plush bedding in a cozy room, Mr. Kim fell asleep in no time.

Before long, Mr. Kim felt something heavy pressing down on him, choking him. He finally opened his eyes. To his astonishment, a huge serpent had wrapped itself around him. 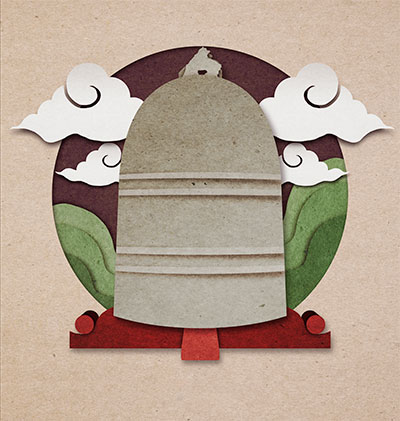 “Who are you? Why are you doing this to me?”

“I’m the wife of the serpent you killed this afternoon.”

Mr. Kim begged for her forgiveness.

“Alright. I’ll let you live, but only if the temple bell rings three times before daybreak.”

“Who would ring the bell this late at night?”

“Well, then you will just have to die.”

That was when they heard the sound of a bell coming from afar.

“Ahhh! I can’t avenge my husband’s death. I did make a promise, so I will let you go.”

The serpent uncoiled itself, finally releasing Mr. Kim. Then, it turned into a dragon and ascended to the heavens.

As soon as the sun rose, Mr. Kim went to the temple to see what had happened. He was stunned to find the lifeless bodies of dozens of magpies underneath the enormous temple bell. Among the dead magpies were the parents of the chicks Mr. Kim saved the day before.

Mr. Kim then carefully buried the birds at a sunny spot. He also went back and buried the serpent he had shot with his bow.