“The Lady of the Shack” by Kim Jong-ae. 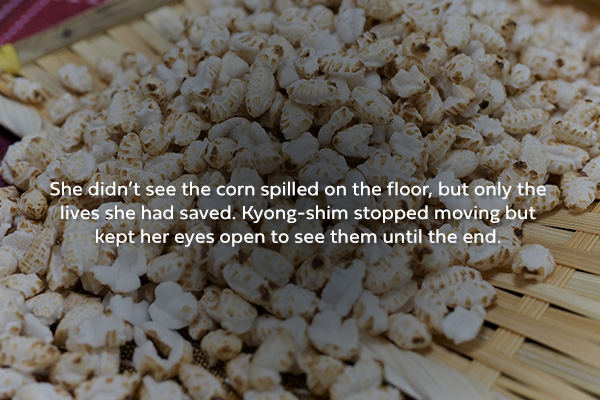 When the rations were terminated and the Arduous March began, those who couldn’t go to work because of the food shortage had to fill out something called an 8.3 form. It was a set of documents about recycling production. Workers had to produce assorted goods to the specification of the Communist Party and offer them to their workplaces or party organizations. It was, in essence, a social task assigned to each workplace. If they didn’t have any goods to manufacture, they had to give a commensurate amount of cash.

The old neighbor opened Kyong-shim’s bag. Realizing that the shiny aluminum pot was Kyong-shim’s wedding gift, the surprised old woman stared at her.

Knowing what the old neighbor’s gaze meant, Kyong-shim told her why she had to sell the pot. She couldn’t bring herself to say that her family had survived on only water for the last two days. Instead, she burst into tears.

“I didn’t realize your family was starving. Why didn’t you tell me? Haven’t you heard that a neighbor is better than a relative in such a situation?” (Neighbor)

“Take our corn for your family. You can pay it back before we run out of food.” (Neighbor)

The family was starving to death, but Kyong-shim was the only one who tried to do something to save them. Her husband powerless and the Communist Party secretary sponged common people dry instead of easing their pain. Although North Korea is a patriarchal society, women came to bear full responsibility for taking care of their families ever since their economy tanked in the late twentieth century. Kyong-shim in the story represents the hardship and resilience of North Korean women. Also at the end, her old neighbor shares her meager food. This scene demonstrates that the writer values the solidarity among women and their sense of community.

Kyong-shim fell to the floor slowly as she saw her family’s miserable behavior.

She felt her consciousness slipping away and her body sinking deep into the ground. She knew this was what death felt like because she had experienced it the day before. But unlike last night, she felt her heart calming down from satisfaction. She was sad last night, but now she was happy. She may be dying, but her family will live. No, she saved them.

Her heart was filled with the satisfaction that she saved her children from starving to death. It wasn’t just a feeling, but a fact.

Her family didn’t realize that Kyong-shim was dying. She didn’t see the corn spilled on the floor, but only the lives she had saved. Kyong-shim stopped moving but kept her eyes open to see them until the end. Her chest stopped moving. An enduring smile like a lily bloomed on her bony face.