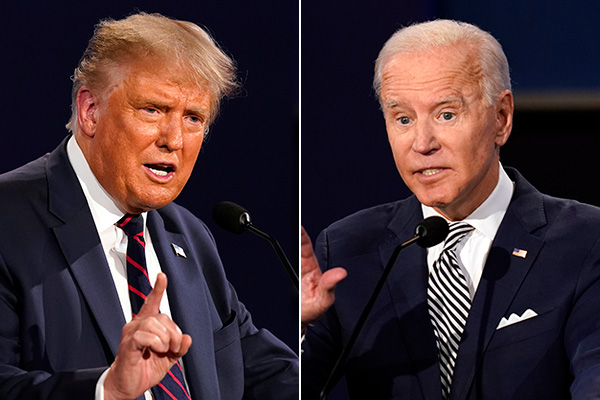 There are only 30 days left before the U.S. presidential election, which will have a tremendous impact on not only the U.S. but the entire world. This year’s election has shaped up into the race between current president Donald Trump and former vice president Joe Biden. Whoever wins the election, the U.S. is expected to strengthen its policy to keep China in check and pursue its own national interest. That is, even if Biden wins the race, the U.S. may keep its current trade policy intact and ask its allies to reinforce cooperation with the U.S. to hold China in check.

Here is Moon Jong-cheol, a researcher at the Korea Institute for Industrial Economics and Trade, who wrote a report about the prospects for the 2020 U.S. presidential election and possible changes in the trade environment.

As far as global trade is concerned, Trump has taken an isolationist stance under his “America First” policy,” which has materialized in the form of trade protectionism and unilateralism. Biden tends to value the status and role of the U.S. as a leader in its relations with allies. He uses trade issues as a means of strengthening unity between the U.S. and its allies and seeking co-prosperity.

Trump’s trade policies have put priority on the U.S. for the last four years, under the slogan of “Make America Great Again.” Accordingly, the U.S. has placed trade pressure on not only China but also its traditional allies such as South Korea, Japan and the European Union.

Trump repeatedly called the FTA between South Korea and the U.S. “unfair” and pressed ahead with the revision of the trade pact. He threatened to withdraw from the North American Free Trade Agreement and signed a new trade deal, namely, the U.S.-Mexico-Canada Agreement that reflects America’s interests. Trump will likely stick to this stance if he wins reelection.

If Trump is reelected, it is highly likely that he will maintain his current policies. In other words, the global trade environment will continue to face the difficulties it has experienced over the last four years. Amid deepening conflict between the U.S. and the World Trade Organization, Trump may seek to withdraw the U.S. from the WTO. He will also mobilize some trade protectionist measures like anti-dumping tariffs and the Super 301. These measures are feared to intensify trade friction between the U.S. and its trade partners.

The U.S. has held trade negotiations with Japan and China during Trump’s first term. Results from the negotiations, if produced, may affect South Korea’s trade with the U.S. If Japan or China concludes trade deals with the U.S. on more favorable terms than South Korea, Seoul may lose its trade advantage that it has secured through the Korea-U.S. FTA.

Biden’s key trade and diplomatic policy, on the other hand, is to strengthen the U.S. leadership over its allies to keep China in check. If the Democratic presidential nominee becomes president, he may request the allies to form a united front against China. In the process, South Korea could be forced to choose between the U.S. and China.

As the vice president under the Obama administration, Biden was a leading supporter of the Trans-Pacific Partnership or TPP, a free trade pact between 12 Asia-Pacific countries. If Biden seeks to reenter the TPP, South Korea will have to decide whether to participate in this multinational trade deal.

If Biden wins the election, and as long as he believes South Korea is a staunch ally of the U.S., the South may find it easier to trade with the U.S. than during the years of Trump. With Trump’s unilateralism gone, South Korea might have more room to negotiate trade issues with the U.S. But the thing is, Biden may use his trade policy to cement political solidarity between the U.S. and its allies. He may ask the allies to show their commitment to Washington’s policy to keep China in check. If the Biden administration believes South Korea will not follow its policy, South Korea could be in a more difficult situation.

Under the Biden government, the U.S. may seek to rejoin the TPP, from which Trump withdrew. South Korea was rather lukewarm toward this trade pact because it has already signed an FTA with most of the TPP members. Therefore it didn’t expect any particular economic benefit in entering the agreement. If Biden actively pushes for this trade deal in light of the unity of the allies, South Korea’s trade relations with the U.S. will be influenced by its decision on whether to participate in the pact.

In fact, many countries neglected to prepare for Trump’s election victory in 2016.    As a result, they have faced difficulties when coping with Trump’s bold and unexpected move.

Not to repeat the same mistake, countries need to analyze various factors that may affect this year’s election and prepare for appropriate strategies for different candidates. With the election drawing nearer, Trump and Biden are locked in a neck-and-neck race.

In most of the polls conducted so far, Biden is a bit ahead of Trump. Trump’s contraction of COVID-19 last week is emerging as a big factor in the US presidential election campaign. Although it seems circumstances are turning favorable to Biden, it’s hard to predict who’s going to be the final winner.

Until the protests against racial discrimination intensified in the U.S., Biden led Trump by up to nearly 15 percent in various polls. But starting in September, the gap began to narrow. Now, it is very difficult to predict how the election will turn out. In the remaining one month, we’ll have to see whether Trump may adopt any wrong policy or fail to manage the COVID-19 situation properly. Another key is how earnestly supporters of the Democratic Party will conduct an anti-campaign against Trump. Along with these factors, any development in Florida, one of the states where the election is so close, may determine the course of the election.

Whoever wins the 2020 presidential election in the U.S., the Korea Institute for Industrial Economics and Trade suggests that South Korea reduce its trade dependence on China and diversify its trade destinations.

Regardless of the election result, the U.S. will continue to strengthen containment against China and their trade friction will only escalate. In the process, South Korea needs to find a way to survive.

Biden calls for relocating the overseas supply chain of American companies to the U.S., and Trump has also stressed the need to do so. If the U.S. adopts a policy of localizing the supply chain, Korean companies that heavily rely on China should fundamentally overhaul their business strategies.

They also need to diversify their trading partners and strengthen cooperation with many other countries, in addition to China.

Trump’s contraction of COVID-19 is panning out to the diplomacy and economy of the world from the US presidential elections. It may be a direct factor in the results of the elections.

The U.S. is expected to continue to prioritize its own interest and conflict between the U.S. and China will most likely increase, as we pointed out before. The future of the global economic and trade environment will be determined by the U.S. presidential election, which is 30 days away.