SOS LAB, a Developer of Hybrid LiDAR for Self-driving Vehicles 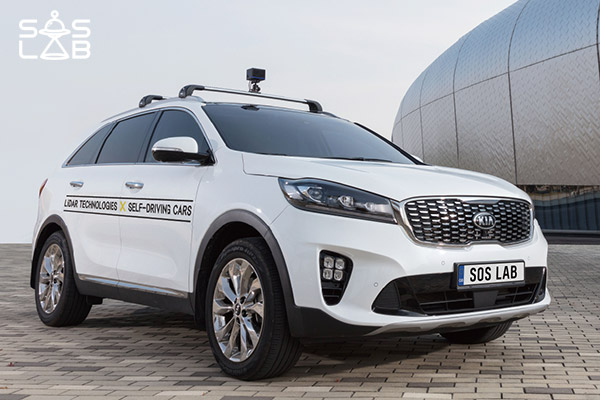 In recent weeks, we’ve introduced some promising companies that won the Innovation Award at the 2019 Korea Electronics Show or KES. The last such firm we’re going to talk about today is SOS LAB, which was selected as the Best New Product at this year’s KES. Let’s hear from Jeong Ji-seong, the CEO and co-founder of the company.

Most LiDAR models currently available on the market require motor rotation. Actually, they are not appropriate as a built-in solution for vehicles as they can hardly last for many years. On the other hand, our solid-state LiDAR was made in the form of a semiconductor chip, and it ensures greater durability, compactness and price competitiveness, compared to conventional LiDAR.

In autonomous driving, the computer must recognize road conditions and surrounding environments perfectly. The key component that plays this role is LiDAR, which stands for light detection and ranging.

LiDAR refers to a laser-based environment detecting system that makes three-dimensional representations of surrounding environments by using laser beams with short wavelengths of light. In other words, LiDAR can create a 3D map that is readily comprehensible to the computer. It can quickly recognize its surroundings even in bad weather and is called the “eye” of self-driving vehicles. However, LiDAR models have yet to meet mass-market requirements due to various reasons including high prices. As a result, SOS LAB has developed mass-producible LiDAR that is more durable, affordable and smaller than its traditional alternatives. Mr. Jeong now talks about the history of his company.

The company was established in June of 2016 by four PhD researchers who had studied LiDAR for 15 years at the Gwangju Institute of Science and Technology. Last year, we secured venture funding worth about 6 million US dollars. At present, the company has 45 researchers, including 12 with doctorate degrees. I’d say SOS LAB is the largest LiDAR developer in Korea. While working in Gwangju, we participated in industry-university research to develop new products. In the process, though, we found limitations in technology transfer. We thought as researchers that we would do a lot better if we concentrated on development on our own. We also believed that a market for self-driving vehicles would open in the near future. So we decided to start our own business.

SOS LAB attracted special attention from foreign media at this year’s Consumer Electronics Show in Las Vegas, the world’s largest electronics and IT show. Global market researcher LEDinside named SOS LAB as one of the top four LiDAR firms that received major attention at CES 2019, along with global players such as Velodyne, Quanergy and Innoviz. So, what is the secret behind the Korean company’s success?

The number of lasers in LiDAR should be increased to improve accuracy. Velodyne’s new LiDAR sensor uses as many as 128 laser beams to produce high resolution, which is very important for navigation and safety in autonomous vehicles. But thanks to our hybrid scanning technology, our product, using only one laser source, can generate the same effect as one with 40 or 80 laser beams. This is our strength.

Currently, LiDAR models on the market are very expensive, roughly priced at 9,000 US dollars.

The prices should be reduced to below 450 dollars to be installed in vehicles. To resolve the issue of affordability, a structural change is inevitable. In other words, it is necessary to simplify the production process. Our hybrid scanning LiDAR could be the answer to this problem.

SOS LAB developed hybrid scanning LiDAR that combines the advantages of the widely-used motor-type scanner with a solid-state MEMS mirror. Micro-electro-mechanical system or MEMS technology is inexpensive and provides sensing capabilities in a smaller package, which can easily be produced on a large scale. Driven by a rotating motor, the hybrid LiDAR offers wide view angles. It is small enough to be put in the car’s headlight and durable enough to last for 15 years or to cover 300-thousand kilometers.

Most importantly, it is cheaper to produce. LiDAR used in the early period of self-driving car research cost 90-thousand dollars per unit. Now, it is 9,000 dollars, one-tenth of the previous amount. Still, automakers are hoping to secure smaller LiDAR with high performance at 100 dollars.

As a result, SOS LAB’s innovative LiDAR is expected to accelerate the process of making self-driving cars popular with the general public. 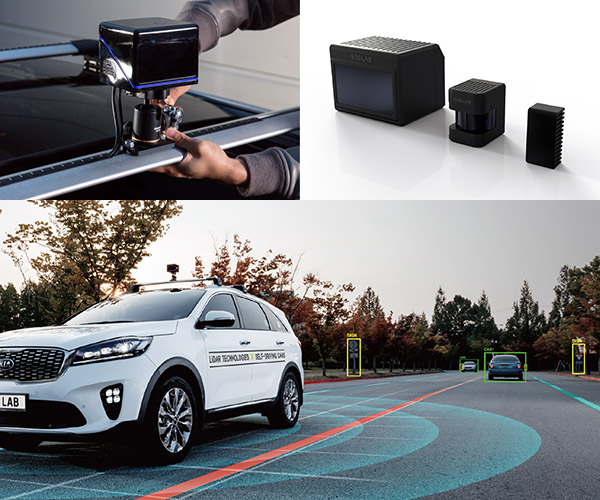 We’ve tested our vehicle-purpose LiDAR in Korea and will also test it overseas next year. Automakers and auto parts manufacturers have to jointly work on how to actually apply it to cars. I imagine the process will take two years. It means we can mass produce our LiDAR two to three years later.

In addition to LiDAR for cars, we’re also working on LiDAR for industrial purposes. We’ve been developing sensors that would replace Japanese products since the summer of last year. They are in the final stage of the quality test.

If everything proceeds as planned, we can mass produce the new sensors and provide them to local semiconductor factories to replace Japanese ones. We’re looking forward to the successful local production of the component.

SOS LAB has patented hybrid scanning LiDAR technology. Other than the hybrid LiDAR for autonomous vehicles, SOS LAB also has LiDAR products used in a variety of industrial applications including factory automation, automatic robots, drones and security systems to detect near-field obstacles. The company’s goal is to become one of the world’s most prominent LiDAR developers.

We aim to produce reasonably-priced LiDAR in large quantities so our product can be installed in all types of vehicles. We’ll continue to carry out research and development to provide advanced driver assistance systems in a more reliable and economical way.

Our self-driving technology is intended for the global market. It is welcome news that Korean companies such as Hyundai Motor and MANDO have been collaborating with global players or inviting investment from them. So, if we develop the best-quality LiDAR for autonomous cars in Korea, it can also work in the global market. We won’t be satisfied with the local production of self-driving platforms but will also devote ourselves to developing the world’s best LiDAR sensor technology for autonomous vehicles.

SOS LAB has transcended the limits of previous products from leading LiDAR companies and presented a new paradigm in the industry. We’re looking forward to the future of this promising company, which is moving toward its goal of becoming the world’s top LiDAR provider.