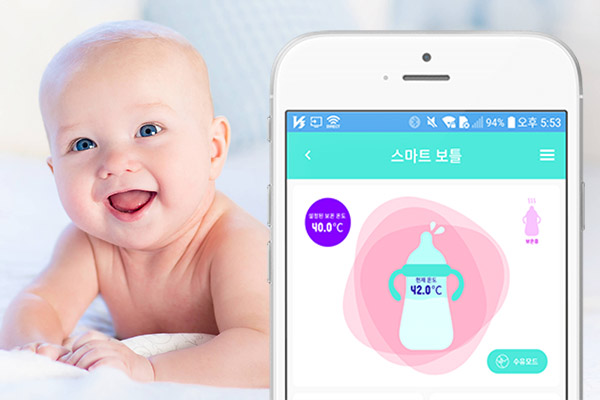 Today, we’re going to introduce you to Littleone, a startup that supports parenting in an easier and smarter way. Let’s hear from company CEO Lee Byeong-gyu.

Littleone was established in 2017 with the purpose of developing IoT devices for childcare. We support healthy and safe childrearing through smart parenting solutions, so even new and inexperienced parents can have an easier time taking care of their babies. Our slogan, “Next Level Parenting” reflects our hope to ease difficulties in raising children and upgrade the level of childcare.

Many new parents, for example, are at a loss what to do when their babies cry. We develop IoT devices aimed at assisting those parents in need.

Littleone’s products connect the Internet of Things or IoT technology by using Bluetooth and sensors with smartphone apps. This is to provide both smart and safe childcare services to young moms and dads who are under parenting stress. As a matter of fact, the company was founded based on real experiences of childrearing.

I set up the company with one of my high school friends. Before that, I was in charge of pattern analysis in the statistics-related area, while my friend did a similar job at a financial company. As he had two children, we found it increasingly difficult to meet with each other. We wondered why childcare was so challenging and what the major challenges were. We thought we could join forces to resolve some of these issues. I analyzed daily routines such as feeding, changing diapers and measuring the baby’s temperature. Meanwhile my friend made hardware capable of collecting the analyzed data. We released a product that combines the two technologies.

Feeding is one of the most challenging parts in raising kids, especially new-borns. New parents are not familiar with the feeding position. They aren’t really sure if the milk is too hot or too cold, and they don’t know what to do when heading out. They are soon left exhausted both physically and mentally.

Diaper changing is another onerous task. Parents should change diapers on time to prevent babies from developing a rash or skin irritation and to ease their inconvenience. Parents must also have a thermometer at home, in the case that their newborn runs a fever.

Littleone developed its business model from these experiences of child-rearing. As its first product, the company created a smart baby bottle that makes feeding easier. 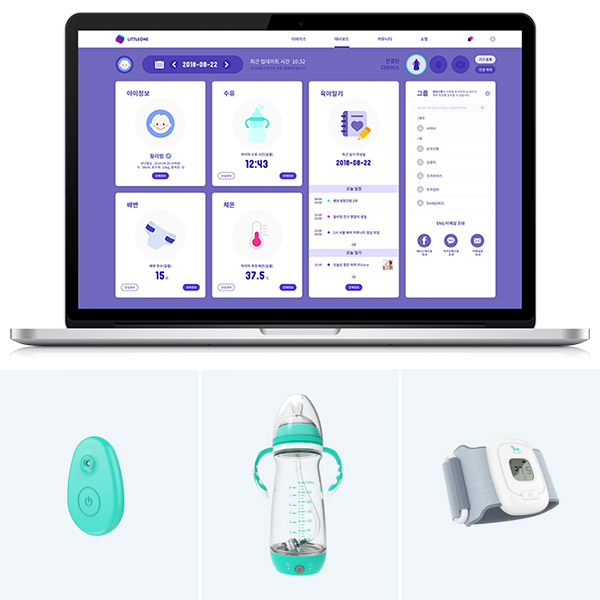 The amount of milk and the feeding time may vary, depending on the infant’s age, weight and gender. But most parents simply set the time and give milk to their babies. Or, they begin to prepare only when the babies cry. In that case, preparation may take longer than actual feeding. Our “Smart Bottle” recommends the proper feeding time in consideration of the babies’ gender and age so their parents can prepare before they get hungry. The bottle warms the milk and keeps it at an ideal temperature of 37 degrees Celsius for two hours. After feeding, the app automatically records how much milk was consumed and how long the feeding took. It analyzes previous feedings and lets the parents know when they have to feed the babies next time and the amount that will be needed.

On the surface, Littleone’s IoT-based “Smart Bottle” looks like an ordinary baby bottle. But a sensor and a heating pad installed in the lower part of this special bottle keeps the milk warm at an optimal temperature so the parents can feed the baby at the desired time. It can also correct poor feeding positioning by combining the two technologies of feeding angle detection and air intake prevention. The device is connected with a smartphone to record detailed data about feeding.

The company offers other smart solutions as well. “Smart PeePee,” for instance, detects the baby’s bowel activities through its patch that is 7 millimeters thin and only weighs 6 grams, and alerts the parents through the smartphone app. This smart diaper sensor informs the parents of the diaper conditions and the amount of diapers consumed. Another product, “Smart Temp,” is a thermometer band made with lightweight and breathable material. Wrapped around the baby’s body, the band can detect temperature changes in real time to protect the precious child from any abnormal signs. These products, along with Smart Bottle, can be found in the U.S. and Japan.

Smart Bottle has been selling on Amazon since it started crowdfunding in the U.S. last December. A Japanese buyer also showed great interest in our product, which is now available on Amazon Japan and Rakuten. Our product got 4.5 out of 5 on Gadget Flow, a website promoting products from e-commerce merchants and crowdfund campaigners. The market has responded positively to this smart feeding bottle that has never been found before.

Littleone unveiled its Smart Bottle on a major crowdfunding platform in the U.S. last year, and the initial production of 5,000 bottles sold out in four months. The company took part in the Consumer Electronics Show, which is the world’s largest tech show, and inked a contract with a Japanese buyer to advance into the Japanese market as well. While selling its product directly on Amazon—the world’s largest e-commerce firm, the company is in the process of making contracts with buyers from Germany and the U.K.

We aim to promote our products among individual consumers through Amazon. But we’re also communicating with many buyers who are making contact with us after seeing our products on Amazon. We’ll develop our products into a comprehensive platform capable of examining children’s health conditions and advising on ways to improve their health. We hope that anyone using our products can become a master of childcare. Our goal is to become a healthcare platform company specialized in childcare products.

Littleone has incorporated cutting-edge IoT technology into baby products to help parents enjoy taking care of their young children without worries. We’re looking forward to the bright future of this company that supports easy, comfortable and safe parenting.