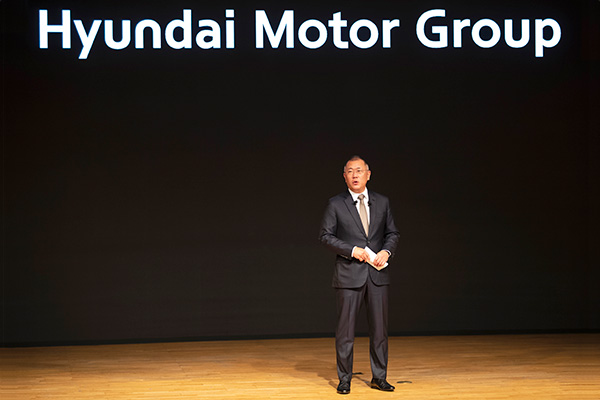 Other than the new Hyundai Motor Group chairman, Samsung Electronics Vice Chairman Lee Jae-yong, SK Group Chairman Chey Tae-won and LG Group Chairman Koo Kwang-mo are relatively young, all aged between their early 40s and late 50s. With second-, third- or fourth-generation offspring of founding families taking the helm of Korea’s four largest conglomerates, a major change is anticipated in the business community. At the same time, their management abilities have been put to the test. Here is economic commentator Chung Chul-jin with more.

Hyundai Motor Group’s leadership has changed for the first time in 20 years against the backdrop of the rapidly changing industry environment. The concept of automobiles is changing, with the word “motor” being replaced by “mobility.” Combustion engines will be phased out, giving way to hydrogen fuel-cell vehicles and electric self-driving cars. The new chairman of Hyundai Motor Group will cope with a new paradigm shift in the automobile industry. Internally, he will also have to reorganize group units’ shareholding structures.

Chung’s father, Chung Mong-koo, who served as group chairman for 20 years, is widely recognized for his role in the development of the Korean automobile industry. He created South Korea’s first and only automotive group and contributed to the remarkable growth of the local auto parts and materials industries. Hyundai joined the ranks of the world’s top five automakers in 2010, overtaking Ford. Last year, the company retained its position as the world’s fifth-biggest carmaker by sales. Its asset shot up nearly ten times over the last 19 years. In recognition of the achievement, Chung Mong-koo became the first Korean to be inducted into the Automotive Hall of Fame in February this year.

Now, new chairman Chung Euisun shoulders a heavy responsibility. He has vowed to transform the company from a traditional carmaker to a smart mobility solution provider. For his first activity after becoming chairman, Chung attended the government’s hydrogen economy committee meeting on October 15.

To build electric self-driving vehicles, secondary batteries, as well as electric devices and semiconductors, are essential. Hyundai Motor will have to cooperate with these industries for a smooth transition from internal combustion engine vehicles to electric autonomous and hydrogen cars. Chung’s leadership style, his emphasis on communication and his efforts to keep up with and lead market trends will prove effective in carrying out the company’s future businesses.

Now that Chung has been officially made head of the group, he has to take over his father’s stake in the group’s key subsidiaries. As the Chung family owns a relatively small stake in the group’s affiliates, the group’s governance needs to be restructured so the new chairman can maintain his managing rights stably. Actually, the company pushed for governance reform two years ago, but the move drew a backlash from investors. Chung may have to deal with the thorny inheritance tax issue as well.

He has other major tasks to contend with, including how to recover sales that have decreased in the aftermath of the COVID-19 outbreak and how to deal with controversy over the safety of electric vehicles.

Now, Korea’s four major conglomerates are all managed by young leaders. The wind of a generational shift is blowing into other business groups, resulting in third- or fourth-generation owners of companies in charge of business management.

Many third- or fourth-generation heirs of large companies are leading the firms. For example, Shinsegae Group Chairwoman Lee Myung-hee gave an 8 percent stake in Emart to her son Chung Yong-jin, vice chairman of Shinsegae Group. She also gave an 8 percent stake in Shinsegae to her daughter Chung Yoo-kyung, president of Shinsegae Department Store. Meanwhile, Kim Dong-gwan, the eldest son of Hanwha Group Chairman Kim Seung-youn, is expected to control the group’s chemical unit.

In GS Group, Huh Tae-soo became group chairman to replace his older brother Huh Chang-soo. But it only seems to be a transitional period before the group’s leadership is passed to the elder Huh son, Huh Yun-hong, who is vice president of GS Engineering & Construction. As we know, Koo Kwang-mo became the new chairman of LG Group in June 2018 after the death of his father, Koo Bon-moo. Likewise, Cho Won-tae became the new leader of Hanjin Group after his father Cho Yang-ho died. The era of the fourth-generation management started in Kolon Group, after the exit of former chairman Lee Woong-yeol.

The young leaders are faced with unfavorable business conditions inside and outside Korea, due to a prolonged economic slowdown, the trade dispute between the U.S. and China, conflict between South Korea and Japan, and the COVID-19 epidemic. They might feel a sense of crisis that even the slightest mistake could lead to their elimination.

It seems their leadership style is clearly different from their predecessors.

The first-generation leaders or founders led their companies based on their inborn talent for business and gut instinct. They include Hyundai Group founder Chung Ju-yung, Samsung Group founder Lee Byung-chull and Lotte Group founder Shin Kyuk-ho. The second-generation leaders mostly followed in the footsteps of their fathers. Like their fathers, they had strong drive, running their companies in a creative and adventurous way and making important decisions on their own.

But that’s not the case with the third- and fourth-generation heirs. They think it is important to listen to experts and communicate with people, rather than show strong charisma and stress their own philosophies. A change is being perceived in management culture.

While some have expectations for business innovation led by the young leaders, many others still criticize and worry about the negative sides of the father-to-son transfer of managerial power. Controversy continues over the unreasonable governance structure, as seen in cross-shareholding, and unfair business practices of large companies’ giving lucrative contracts to their own affiliates to facilitate the process of family business succession.

Yet, some analysts say that it is necessary to improve these shortcomings and use the hereditary transfer of management control in a positive way instead. Unlike the older generation, the young leaders maintain close relations with each other. Through brisk exchanges, they could join forces to nurture next-generation growth engines.

Industry watchers have constantly criticized and expressed concerns over the hereditary succession of family-run businesses, calling for the need to introduce professional managers. I guess the third- and fourth-generation leaders will be the last generation to take over management rights from their fathers because of a high inheritance tax rate of over 50 percent.

Unlike presidents of large business groups in the U.S. and Europe, the young leaders of conglomerates in Korea are quite intimate with each other and even hold their own meetings. Personally, I hope they will join hands in the areas of cars, secondary batteries, electric devices and chips so Korea will be able to lead the electric self-driving vehicle market. Such cooperation between leaders of different companies is very hard to find in other countries. Korea’s unique corporate culture could be used in a positive way.

Economic uncertainties are growing due to unfavorable external factors and COVID-19. In this situation, attention turns to whether the young business leaders in Korea will dismiss the concerns over the negative aspects of management control succession and prove their business abilities.