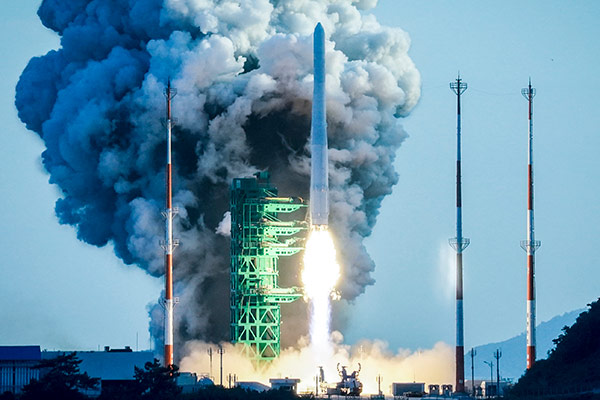 South Korea’s first homegrown space launch vehicle Nuri blasted off from the Naro Space Center in the country’s southwestern coastal village of Goheung on October 21. It successfully traveled to an altitude of 700 kilometers in 16 minutes, but it failed to place the mock payload into the intended orbit.

Even in global space powerhouses, less than 30 percent of newly developed rockets succeed on their first attempt. Only six countries; the U.S., Russia, France, China, India and Japan, have developed a space launch vehicle capable of sending a satellite weighing over 1 ton designed for practical use into orbit. Given that, it would be fair to say that the Nuri’s maiden flight is considered a success, opening up the possibility of South Korea’s independent space development.

Here is Kim Dae-ho, director of the Global Economic Research Institute, to examine the significance and economic value of the Nuri launch.

For the Nuri launch to be completely successful, the rocket should safely lift off and drop its payload into the targeted orbit. Key technology lies in the separation of the three stages at the right time. The launch vehicle flew to an altitude of 700 kilometers without any setback, although it failed to send its satellite into orbit. But the shortcomings can be made up for during additional test-launches of the Nuri in the future. I’d say that the latest launch is a 90 percent success.

In 2013, South Korea successfully launched its first-ever space rocket Naro. While the Naro could carry a small satellite weighing around 100 kilograms, the recently launched Nuri is capable of carrying a 1.5-ton payload. Most notably, the first stage of the two-stage Naro rocket was built using Russian technology. The three-stage Nuri, on the other hand, was developed solely by Koreans. That’s why the Nuri is called South Korea’s first homegrown satellite launch vehicle.

Countries that developed space rockets early on are unwilling to transfer relevant technology to latecomers. They do not sell relevant parts and materials, either. That’s because the frontrunners do not want their hard work and achievements to go to waste after the latecomers catch up with them. Also, a rocket carrying a nuclear warhead, not a satellite, may turn into an intercontinental ballistic missile. Space vehicle leaders are therefore reluctant to help latecomers, in light of national security. In this sense, it is very challenging for a country to develop a space rocket locally from scratch without help from others. When test-launching a rocket, South Korea should be extremely careful not to let its rocket cross the border into other countries. Despite many difficulties, the South Korean space rocket lifted off successfully, although the project may not be an absolute success. Still, the result of the project with an investment of 1.8 billion US dollars is considered satisfactory.

Some 300 Korean firms participated in the Nuri project. Hanwha Aerospace made the engine, while Korea Aerospace Industries and Doowon Heavy Industrial developed the rocket’s frame and propellant tank. The launch pad was independently manufactured by Hyundai Heavy Industries, and a combustion test was conducted by Hyundai Rotem. In addition to those large companies, small-and mid-sized manufacturers of materials, parts and equipment also took part in the project. In the process of developing and launching the Nuri, South Korean companies are believed to have enhanced space development capabilities. Expectations are running high for a new era in Korea’s space program.

If the engines used in the Nuri are slightly altered for airplanes, the Korean aviation industry will be able to develop significantly. Technologies for making the waterproof fabric of Gore-Tex, water purifiers and microwaves as well as the medical imaging technique of MRI were all developed in the course of researching space technologies. The car’s navigation system uses signals transmitted from space, and self-driving vehicles also need space technology. In the telecommunications area, it won’t be necessary to set up transmission towers. In short, added value created from space exploration is infinite. Winning the space development competition will ensure scientific and economic success. The latest Nuri launch is indeed a major milestone in South Korea’s space technology. It is expected to spark up the country’s industrial and scientific innovation.

The complete success of the Nuri launch in the future will generate tremendous ripple effects. South Korea will be able to launch some 100 satellites to be in the next ten years, including those needed for Korea’s own version of the Global Positioning System, without having to depend on other countries. It will also sharpen the competitiveness of the local telecommunication industry, which is preparing for the sixth-generation telecommunications network.

The Nuri launch is just the beginning of Korea’s space development. If its performance test is done at the second launch scheduled for May next year, the Nuri will fly to space four more times until 2027. The Nuri will play a major role in South Korea’s space exploration program, sending next-generation satellites into space and exploring the moon eventually.

In the first stage, the Nuri will carry a satellite and let it stay in the right orbit. In the second stage, South Korea aims to develop technology of launching multiple satellites on a single rocket. Currently, one launch vehicle carries one satellite. The third stage involves traveling to the moon and Mars. The U.S., China, Russia and India are working on this stage. In the fourth stage, spacecrafts with passengers aboard will fly to outer space and human settlement could be built there. Now that South Korea has successfully sent the space vehicle to an altitude of 700 kilometers, it will be able to reduce the technological gap even faster.

There are many challenges to be overcome. Korea’s aerospace technology remains at 60 to 80 percent of that of space powerhouses such as the U.S. and Russia. Its budget allocated for the space industry is far from enough. South Korea still has a long way to go before becoming a prominent player in the space industry.

South Korea is a tech powerhouse, with its smartphones dominating the world market. But it lags behind other countries in basic science and space development. It is necessary to strengthen relevant education in schools and arrange a legal system concerning the development of the space industry. Most importantly, the state-level development of space technology and private companies’ participation in commercial use of space should generate the synergy effect. For that purpose, it is urgent for the government to give support to the industry and raise public awareness of this issue.

“Nuri” means “world” in Korean. The name of the space rocket contains the nation’s hope to reach outer space and explore a new world. With the Nuri launch, South Korea has opened an era of space development, with local citizens showing greater interest in the aerospace industry. If Korea grows to a space powerhouse, based on the industry’s achievements and public support, the country could realize its dream of sending a probe to the moon by 2030.