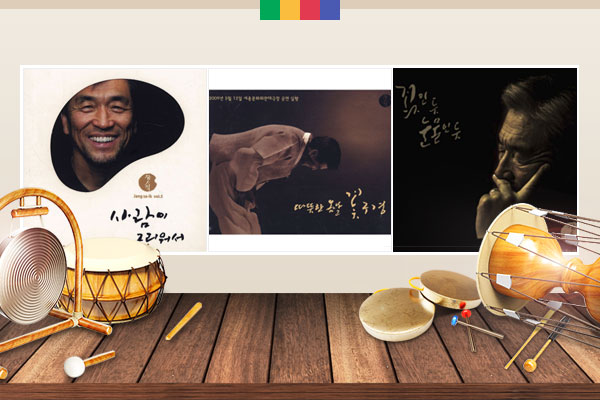 There once was a singer who released his debut album at the age of 47. A lot of people may look forward to retirement at that age, and few would consider embarking on a new career then.

This man held over fifteen jobs by the time he became a singer, from a clerk at a small trading company to a fruit vendor and a furniture salesman. The last job he had was at a car repair shop run by his brother-in-law. One of the customers at the time was the manager of Seo Taiji서태지, one of the most admired musical and cultural icons in Korea.

The manager was looking for a person to play the taepyeongso태평소 for Seo Taiji’s “Hayeoga하여가” in a concert. The man said that he knew how to play the taepyeongso, so he was invited to perform a couple of times. A while later, he lost his job at the car repair center and, faced with unemployment, he wrote down a list of what he could do and what he wanted to do. At the bottom of that list was playing the taepyeongso.

Desperately thinking that that’s the only recourse left to him, he offered to play in a samulnori사물놀이 without pay. That’s how he got his start as a taepyeongso player in the famed Lee Kwang-su이광수 samulnori band. From then on, the man’s music career took off, and he even won an award at the prestigious Jeonju Daesaseup전주대사습 Festival. But his real talent was discovered one day at post-concert party.

A pianist by the name of Lim Dong-chang overheard the man singing Korean folk songs. Impressed, Lim asked him to join him in a concert. This was how the man launched his traditional Korean singing career. His name is Jang Sa-ik장사익, now considered a legend in traditional music.

This song evokes an image of a group of elderly vendors selling vegetables from their gardens at a rural market. They are mostly there to chat with their friends and meet other people rather than sell their produce. It’s a heart-warming sight seen mostly in country markets.

After his first concert, Jang Sa-ik said he felt happy for the first time in his life. He was grateful to everyone, even his brother-in-law who had fired him from his last job, for leading him to this moment. He realized that he was able to become a musician only because of all their help.

Jang channels a tumultuous life through his songs. Sometimes he would sing in sad whispers and sometimes in a wailing voice, causing the listeners to tear up as they sympathize with him. The next song we’re going to hear is titled “Samsik,” which is about a hectic day in the life of a Korean mother back in the old days.

One of Jang Sa-ik’s most well-known songs is “Wild Rose,” which has a verse that goes “The scent of a wild rose is too sad.”

He wrote this song before he became a professional singer, when he was at the lowest point in his life. He smelled a fragrant scent one spring day and, after searching for the source, he found some red roses in a garden. But the roses were not where the scent was coming from. After searching further, he found some white wild roses in one corner, half hidden among the flashy red ones.

The shy and understated way these flowers appeared reminded him of his sad self. Nobody imagined at the time that the song inspired by a humble wild rose would later become his signature song.

Many of us go through hard times. College students worry about their future as they search for jobs and adults have to fight to keep theirs.

Everyone has his or her own burden to bear. But we never know what brilliant talent is hidden inside of us. We all need to believe that doing our best will lead us to that moment when we can shine bright with joy and fulfillment.

Let’s conclude this episode of Sounds of Korea with