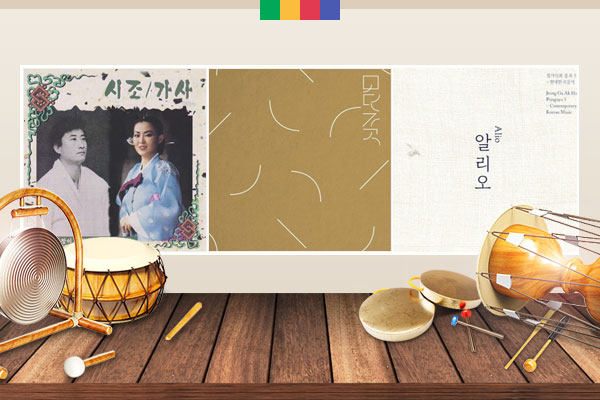 People of the old days used to enjoy jeongga정가, a vocal genre that is further divided into three types - gagok가곡, sijo시조, and gasa가사. Gagok and sijo were basically poems set to melodies, while gasa were a bit longer than sijo poems.

Only twelve gasa pieces survive to this day. Many of them reflect a Korean scholars’ desire to live quietly in nature, away from the secular world. Some better known gasa songs include “Suyangsanga수양산가”, “Cheosaga처사가,” and “Baekgusa백구사.” A couple of them are about love, such as “Hwanggyesa황계사,” which is about a woman’s longing for her loved one, and “Maehwaga매화가” or “Song of Plum Blossoms,” which admires plum blossoms that flower in the spring snow.

The first song we have for this week’s Sounds of Korea is “Chunmyeongok,” translated as “Spring Sleep Song.” Its lyrics are about waking up late one balmy spring day and looking out a half-opened bamboo window to admire a garden full of blooming flowers and butterflies fluttering among them. In old Korean songs, flowers and butterflies often symbolized romantic relationships. The person in this song may have been searching for love themselves. Here’s Lee Jun-ah singing “Chunmyeongok.”

One spring day, a Confucian scholar has a couple of drinks before searching venturing out to seek excitement. Drunk from alcohol or perhaps from the fragrant spring air, he wanders a bit before he spots a lovely woman looking out a window. The man falls in love with her at first sight. Such a simple and romantic life was what many longed for in the old days.

Compared to gagok, which is sung to string instruments in a rather rigid and inflexible way, gasa pieces are more liberal in atmosphere and usually accompanied by a single instrument such as daegeum or haegeum.

This lighthearted piece is subtitled “Coffee in the Afternoon” and invokes a delightful afternoon spent with friends drinking coffee.

Music 2: Chunmyeongok – Coffee in the Afternoon/ Performed by Modern Gagok

That was “Chunmyeongok – Coffee in the Afternoon” performed by Modern Gagok. The next piece of music we’re going to enjoy is “Dream of an Old Fisherman,” a new interpretation of a gasa called “Eobusa어부사.” In old Korean songs, fishermen were often depicted as wise old hermits who live away from the materialistic world. A portion of the lyrics can be translated as thus.

An old man with silver hair lives by the sea.

He says it’s better to live by water than in a mountain.

What kind of life did this fisherman live? Did he have different aspirations when he was a young man? Living a quiet life close to nature is an ideal life for many. This episode of Sounds of Korea concludes with “Dream of an Old Fisherman” performed by the traditional music group Jeong Ga Ak Hoe.