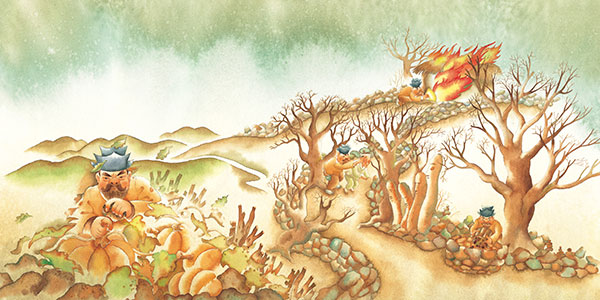 Once upon a time in Korea, there lived two brothers - The older boy was named Nolbu and the younger one Heungbu.

When their parents passed away, Nolbu took all the inheritance for himself and kicked out Heungbu’s family. 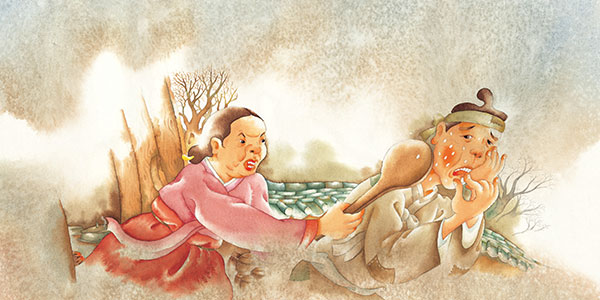 One morning, no longer able to bear the crying of his hungry children, Heungbu went to his brother’s house to beg for food.

“What? You want this rice?”

Then she took the small paddle she was using to scoop rice and struck Heungbu across the cheek with it. 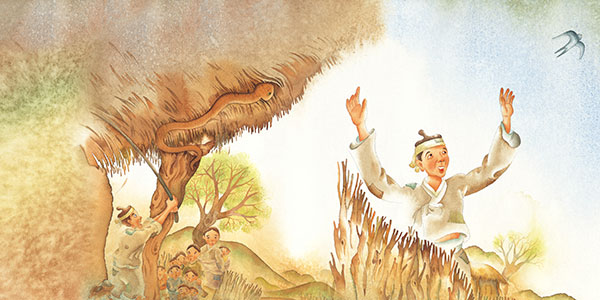 Spring came at last. One swallow made its nest under the roof of Heungbu’s house.

Then one day, a large snake started slithering its way up to the swallow's nest.

“You nasty snake, get away from them!”

“Look, one of the chicks must have fallen out of the nest!”

Heungbu tied the baby swallow’s injured leg with a piece of cloth. Days went by and the chick grew strong enough to fly on its own. 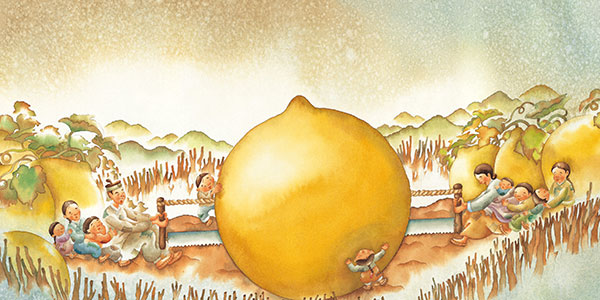 The swallows returned the following spring. The chick with the broken leg brought a gourd seed.

Heungbu and his wife planted the seed and soon the gourd plant sprouted and grew up strong and healthy. Before long, the plant bore huge gourds.

Inside the gourds were chests and sacks that sprouted money and rice endlessly. Heungbu became rich beyond anyone’s imagination. 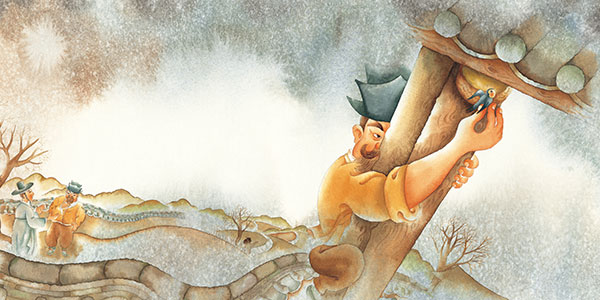 After learning how Heungbu became so wealthy, the greedy and impatient Nolbu couldn’t wait any longer for a real snake to appear, so he reached into the nest and broke a swallow’s leg with his hand. Nolbu wrapped a piece of cloth around the broken leg.

The following spring, the couple planted the seed that the injured swallow brought and it soon grew to bear fruits. Nolbu and his wife hurriedly sawed open the gourds.

What did they find inside the gourds? 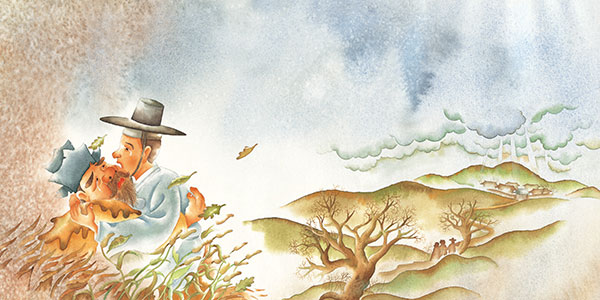 A band of robbers and police officers jumped out of the gourds and destroyed Nolbu’s house and beat the couple with their sticks.

“You should get punished for tormenting the kind Heungbu and kicking his family out.”

With their stomachs empty and nowhere to go, Nolbu and his wife headed to Heungbu’s house. Heungbu welcomed the repentant couple with open arms. The two brothers and their families lived happily ever after and the swallows returned to them every spring.