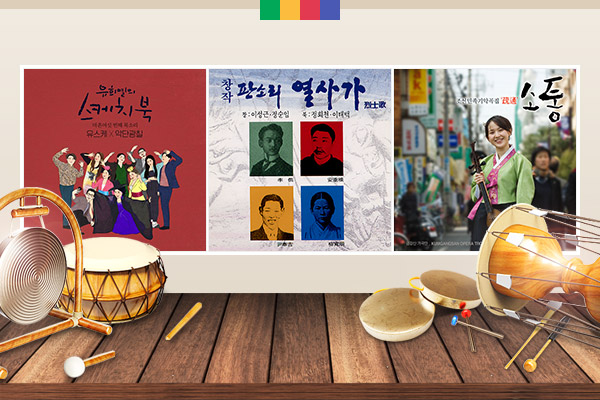 Leenalchi’s “Tiger Is Coming” gained huge popularity last year among the younger generation with its modern adaptation of a song from pansori “Sugungga” and Ambiguous Dance Company’s unique choreography and outfits. The Korea Tourism Organization’s combination of tradition and modernity drew the world’s attention to the new type of hallyu. There was another traditional band that won global attention together with Leenalchi and that band is Akdan Gwangchil악단광칠. Its first album featured modern renditions of songs from the Hwanghae-do region and its second one contained creative pieces about the lives of young people these days, such as “Life is Like a Flower.” The music of Akdan Gwangchil is unique in that only traditional instruments are played without the addition of modern western music such as electric guitars. You may not be familiar with the name Akdan Gwangchil, but the title marks the year 2015, the 70th anniversary of Korea’s independence, when the band was first formed. The name illustrates the band’s intent to remember the meaning of independence and carry on the Korean tradition. Today’s first piece is “Bell-bottomed Pants” by Akdan Gwangchil.

That was Akdan Gwangchil singing “Bell-bottomed Pants.” Some of you may think this song doesn’t sound like the usual gugak song, but being free to do whatever you want is the most important ramification of gaining independence from Japan’s colonial rule. Around the time of Korea’s liberation in 1945, there was a new creative pansori piece popular among ordinary Koreans. It was “Yeolsaga열사가,” which means the song of patriotic martyrs. The song featured lives of well-known Korean freedom fighters such as Lee Jun이준, Ahn Jung-geun안중근, Yun Bong-gil윤봉길 and Ryu Gwan-sun유관순. It is assumed that pansori master Park Dong-sil composed the melody while someone else wrote the words. The song was probably enjoyed in secret before Korea gained independence from Japan and became widely known only after the liberation. When anti-Japanese sentiments were at their peak, people supposedly cheered when a singer sang “Yeolsaga” and waved a Korean flag. The song became so popular that all Korean people learned to sing it like a pop song. Now we’ll listen to the part about Ryu Gwan-sun from “Yeolsaga,” which describes the span of time when she returns to her hometown to organize an anti-Japanese protest together with other Korean women. Here’s Jeong Sun-im singing the song.

Park Dong-sil allegedly received a lot of help from a female pansori singer Jang Woljungseon장월중선 when writing “Yeolsaga.” Back then traditional singers were not used to writing music notes. There were hardly any recording machines so it wasn’t easy for them to remember all the songs. So, Park Dong-sil asked Jang to remember the song for him, because she was known for her excellent memory. She remembered all the notes, which was instrumental in Park Dong-sil completing the song. Jeong Sun-im who just sang “Ryu Gwan-sun Yeolsaga” is Jang Woljungseon’s daughter and learned to sing from her mother. Back in the mid-1940s “Yeolsaga” was quite popular but it faded from people’s memory after the independence, not because people forgot about the joy of gaining freedom, but because the Korean War broke out not long after the liberation. Many artists were divided in their allegiance to South or North Korea. Park Dong-sil remained in North Korea and with the Cold War raging on, any mention of the names and works of artists who defected to North Korea was tabooed in South Korea. But when South and North Korea began talking again in the 1990s, the forgotten musicians and their music were recovered and that was when “Yeolsaga” came to see the light again. This week’s episode will conclude with the Geumgangsan Theater Troupe comprised of Korean-Japanese musicians performing “The First Beacon.”