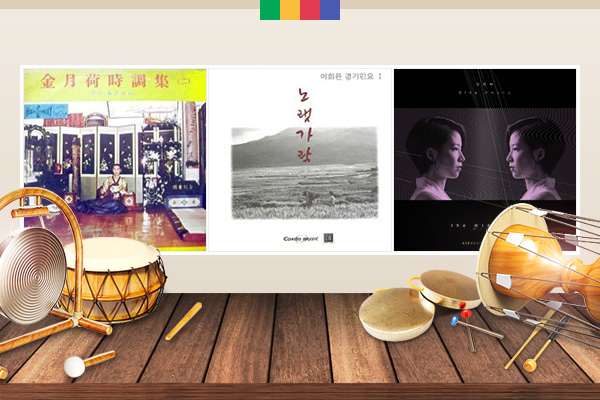 Sijo is Korean traditional poetry that follows a fixed form. Each sijo poem is comprised of three lines, each one having between 14 and 16 syllables. Korean students must be familiar with such sijo poems as “Has the eastern window brightened? A skylark is singing” or “A great mountain may be tall, but it is merely a mountain beneath the sky.” But not many Koreans know that sijo poems were song lyrics sung to certain beats and melodies. It may be because Koreans learned about sijo poems in Korean literature class instead of in music class. Anyway, there are two ways to sing sijo poems – gagok and sijo. Gagok is sung in a strict set form accompanied by an orchestra of gayageum, geomungo, daegeum, piri, janggu and more, whereas sijo is a more popular form of songs that require a much fewer number of instruments. A sijo can be sung to the accompaniment of only a janggu or a couple of wind instruments. The first sijo song we have for you is “Woljeongmyeong월정명” by gagok singer Kim Wol-ha, the practitioner of national intangible cultural asset.

As mentioned before, a sijo poem is composed of three lines, which follow the general arc of storytelling, beginning with context and then moving onto development and ending with a conclusion. Each line has two segments, each one having two words made up of three or four syllables, amounting to roughly 45 syllables for an entire poem. Sijo poems used to be enjoyed by the upper class of yangban or noblemen, but also by the common people in the late Joseon period. Once commoners began to write and sing sijo poems, they no longer followed the confining form of sijo and began to add more letters to tell their stories. Such long sijo poems were called saseol사설 sijo, which became quite popular among the lower class. Some sijo poems were set to the tunes of folksongs. One such example is Gyeonggi folksong “Noraegarak노랫가락” meaning a popular song. The lyrics go as follows.

I will fly ten million lis away and alight on a place where there is no parting.

If partings exist there as well, I will fly another ten million lis.

“Noraegarak” was originally sung by shaman priestesses in the Seoul and Gyeonggi region to invite spirits during a shamanistic ritual. When the song was sung by professional singers under the title “Munyeoyuga무녀유가,” it became widely known as a folksong. Even in the old days, not all songs were regarded the same. Just like there are many different song genres these days - hip hop, ballade or folk – sijo songs were considered the songs for the elites while pansori or folksongs were for the common people, even having different names like “sori” or “japga.” The word “norae” in “Noraegarak” meant sijo songs, but by adding the term “garak,” it indicated that a sijo poem was put to a folk melody.

Coming up next is “Woljeongmyeong” sung by Hwang Jin-ah. This is a recitation of poet Lee Sang’s “Ogamdo오감도,” or “Crow’s Eye View,” set to the tune of “Woljeongmyeong” you heard earlier in this program. “Ogamdo” is considered one of the most abstruse poems by the genius poet. The poem was published in a series on a newspaper during the 1930s, during the Japanese occupation of Korea, but the series was terminated when readers complained that the poem was too difficult to understand. Here are some lines from the poem.

Thirteen children race on the road.

The thirteen children are a group of scary children and frightened children.

One child among them could be a scary child.

Two children among them could be scary children.

The pome is recited by geomungo virtuoso Hwang Jin-ah against the singing voice of Ji Min-ah.