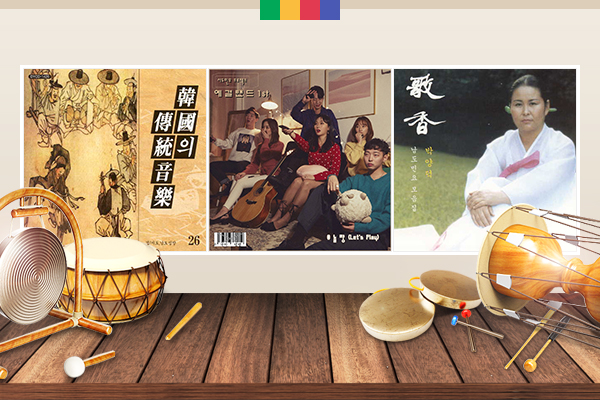 In the old days, noblemen and ordinary folks enjoyed different kinds of music. The music for the royals or noblemen were called jeongak정악, meaning the right music. Included in jeongak were songs for the upper class called jeongga정가. Meanwhile, ordinary people listened to what we now know as folk music, which included pansori or folksongs lumped under the umbrella term of japga or motley songs. Seonbis 선비 or Confucian scholars didn’t deign to listen to such songs. But these days, the term japga came to refer to all songs performed by trained professional vocalists. There are two kinds of japga – the ones sung while sitting down and those sung while standing up and dancing. The former is called jwachang좌창 and the latter ipchang입창 or seonsori선소리. Today we’ll listen to a seonsori piece titled “Santaryeong산타령” meaning a mountain song. “Santaryeong” is a blanket term for a set of songs about mountains, such as “Nolryang놀량,” “Apsantaryeong앞산타령,” “Dwitsantaryeong뒷산타령,” or “Jajinsantaryeong자진산타령.” A mogabi 모가비or the leader of a singing band starts off with a loud shout, which is followed by other singers in the band who sings while dancing or beating a small drum called sogo소고. Today we’ll listen to the late gugak artist Jeong Deuk-man and a male chorus singing “Apsantaryeong” from “Santaryeong.”

The song sounded very cheery with the male vocalists’ powerful voices. Such seonsori songs were all the rage in Hanyang한양, the old name of Seoul, toward the end of the Joseon Dynasty. Various singing bands called soripae소리패 such as Ddukseom뚝섬 soripae, Hanggang한강 soripae and Gwacheon과천 Bangah-dari방아다리 soripae, were known to have performed Santaryeong. These bands would perform wherever there was a huge crowd of people. For instance, there was a time-honored tradition of crossing a bridge on the first full moon of the year. Called dapgyo답교, this folk practice involved people crossing a bridge, believing that in doing so, they would be protected from any disease or accident in the leg for an entire year. Back in those days, there were only a few bridges to cross in Hanyang, perhaps two or three over the Cheonggyecheon청계천 Stream. So you can imagine how many people would gather at those bridges. Singing bands would hold performances at those occasions to make money while entertaining the crowd. The first song in the Santaryeong series is “Nolryang놀량,” which means ready to play. The song starts off with the descriptions of mountain sceneries and then wraps up with a love story. Here’s Yegyul Band performing “Nolryang.”

Korea is a mountainous country, so there are naturally many songs about mountains. Next song is a Santaryeong from the Jeolla-do전라도 region. Also titled “Sanajitaryeong산아지타령” for its refrain that ends in “Sanajiroguna산아지로구나.” People of Jeolla-do Province reportedly sung this song whenever they went out to work in the fields, to chop firewood in the forest, or when they got together for fun. The song starts with a frequently used expression lamenting the shortness of human lives. The sky and earth do not age and the moon lives forever, but man lives only for a hundred years in quiet and lonely mountains. There are also some tender lines in the song, such as “If you’re too cold or too hot, come into my arms. If your pillow is too high or too low, rest your head on my arm.” This loving Santaryeong from the southern region is performed today by Park Yang-deok and a chorus.