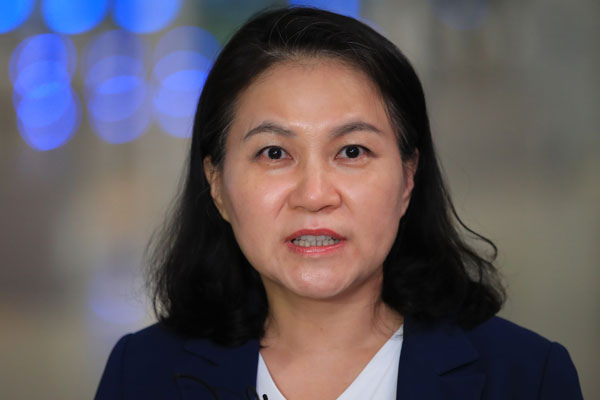 South Korea's candidate for the leadership of the World Trade Organization(WTO) highlighted her country's growth experience and her 25-year career that centered around it.

After meeting with members of the WTO special General Council in Geneva on Thursday, Seoul's Trade Minister Yoo Myung-hee held a news conference.

"I am actually in the best position to understand all members' concerns and interests at WTO. As I mentioned before I have built my career in trade in the Korean government in the last 25 years and I personally witnessed Korea grow from one of the less developed countries to become one of the largest trading nations through the multilateral trading system, so I believe that all other members should have the same opportunities that Korea could enjoy for its economic development."

She said that the world has witnessed growing protectionism and trade tensions. With the coronavirus pandemic adding further strain, Yoo presented her "3R" strategy for a more “relevant,” “resilient” and “responsive” WTO.

"When we can actually achieve some multilateral agreements after long years of stalling negotiations, that can build the momentum to tackle more difficult and structural issues including agriculture, e-commerce and all other issues that members are currently discussing. So having said that, I would say that I will work hard and make the utmost effort to produce a tangible outcome for the multilateral trade agreements at the WTO"

The international trade authority is selecting a new director-general after Roberto Azevedo of Brazil announced his plans to step down next month. Amid worsening trade disputes with China, U.S. President Donald Trump consistently blamed the WTO for being unfair and paralyzed its dispute settlement appellate body by blocking the appointment of its judges.

While a total of eight candidates are seeking the WTO's new leadership, Yoo is opposed by Tokyo, which initiated a trade dispute with Seoul after the South Korean supreme court ordered Japanese defendant companies pay reparations to the victims of wartime forced labor.

"I'm confident that Japan will also look at the candidates. When they actually look at the candidates, to Japan, what's utmost important is the person's, the candidate's, competency and capability to save and enhance the WTO, and also to take up WTO reform. So in that regard, I will reach out to Japanese colleagues and will present my vision for the WTO."

Candidates from Mexico, Nigeria, Egypt, Moldova, Kenya, Saudi Arabia and Britain are running against Yoo. The WTO director general is elected by consensus of its 164 members.