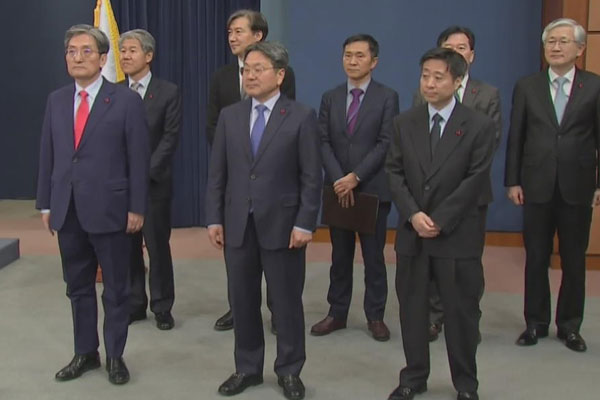 President Moon Jae-in has replaced his Chief of Staff Im Jong-seok with the South Korean Ambassador to China, Noh Young-min.

The outgoing presidential chief of staff made the announcement of the reshuffle Tuesday.

"It will be difficult for the Moon Jae-in administration to meet the Korean peoples' expectations. However, the president's resolve has remained unchanged in the past twenty months. There will be more challenges in 2019, both international and domestic. I ask the Korean people to fully support the president in his efforts to confront the challenges faced by the nation."

Before serving as Seoul's ambassador to China, Noh was a three-term lawmaker. During the 2012 presidential election, Noh served as Moon's chief of staff and in 2017, he headed Moon's campaign headquarters.

The new senior presidential secretary for political affairs, Kang Gi-jung, was also a three-term lawmaker. He served as the chief policymaker for the then-opposition Democratic Party when Moon was party leader from 2015 to 2016.

The reshuffle comes amid public criticism over the office of the president, following controversies surrounding the alleged surveillance of private citizens by the top office's civil affairs officials.

President Moon is also expected to carry out a Cabinet reshuffle around Lunar New Year's Day in early February, a few months after which he will begin the third year of his five-year term.