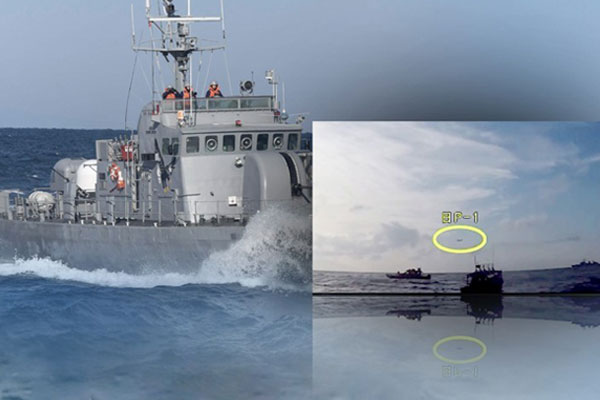 According to South Korea’s Joint Chiefs of Staff, the Japan Maritime Self-Defense Force’s P-3 aircraft flew close to South Korean destroyer Daejoyeong at an altitude of 60 to 70 meters just 540 meters away. The incident took place near Ieodo, a submerged rock south of Korea's southern island of Jeju, at around 2:03 p.m.

In the Davos talks, Kang told Kono in her opening remarks that it was the third incident of its kind and expressed concern and regret about the situation.

The minister, however, said she believes there is still consensus between the two sides that they should continue to advance their ties and manage such issues in a restrained and thoughtful manner.

In response, Kono said it's a difficult situation, but meaningful to have a face-to-face meeting and that he hopes they can discuss current issues candidly.

The South Korean Foreign Ministry said the top diplomats discussed cooperation in efforts to denuclearize the Korean Peninsula and settle peace in the region during the meeting, which was also attended by South Korea's top nuclear envoy Lee Do-hoon.

It said the two sides also discussed issues related to bilateral relations including the South Korean rulings on Japan’s forced labor and Japan's claim that a South Korean destroyer locked its fire-control radar on a Japanese patrol plane last month.The ministry said the two ministers reaffirmed the need to make efforts to develop future-oriented Seoul-Tokyo relations while addressing thorny issues together with wisdom, and agreed to continue close communication and exchanges.