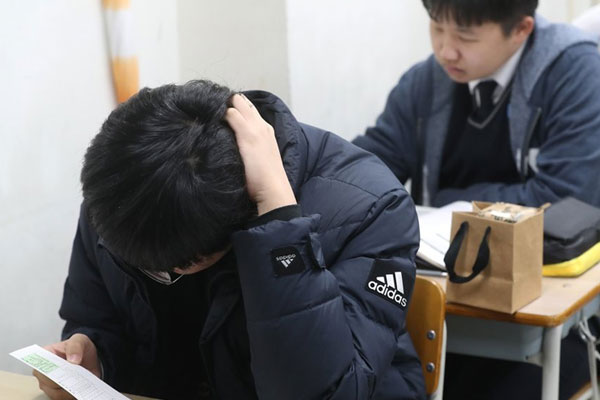 Nearly 500-thousand people wishing to go to college next year sat for the annual College Scholastic Aptitude Test, or CSAT, on Thursday.

High school juniors gathered in front of test sites to rally behind test takers as they entered.

But as the CSAT began, the entire nation tried to keep quiet for exam takers.

Drivers were advised not to honk their horns and live-fire military exercises were rescheduled to ensure the most conducive test environment.

Flight takeoffs and landings were banned during the 35-minute English listening tests in the afternoon, as well.

Government offices and corporations pushed back morning start times by an hour to ease traffic. Stock exchanges also delayed their trading by one hour.

Meanwhile, many parents went to churches and temples to pray for their children as they take the crucial test, which will largely determine the future of its takers in South Korea's highly competitive educational environment.

CSAT scores will be released on December fourth, along with finalized data about the number of test takers. Preliminary statistics suggest that the number of people who sat for the test this year may have been below 500-thousand.

If so, it would be the first time the figure fell below the half-million mark since 1993 when the CSAT was introduced nationwide.