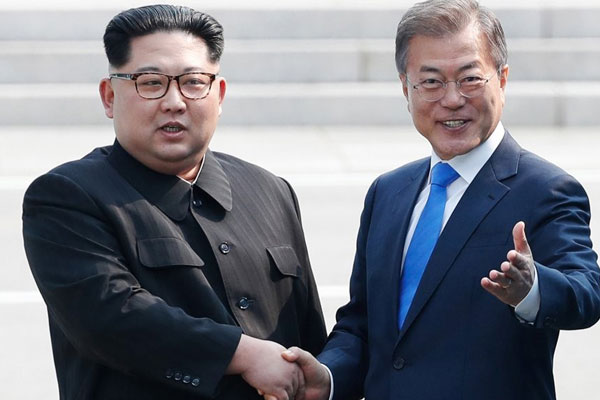 The office said that Kim conveyed encouragement and support regarding the COVID-19 situation and Moon also replied back expressing gratitude.

It marks the first correspondence between the two this year.

Last October, Kim sent a letter of condolence when Moon's mother passed away while President Moon sent an invitation for the North Korean leader to attend the South Korea-ASEAN Special Summit held in November.

Yoon Do-, senior presidential secretary for public communication, told reporters Thursday that in the letter, Kim expressed his faith in South Korea's ability to overcome the new and also expressed concern over President Moon's own health.

Yoon said the North Korean leader said he will quietly support South Korea's fight against COVID-19 and showed his friendship and trust toward .

Some speculate the outbreak may be serious inside North Korea.

Others say it's a separate matter as Kim Yo- criticism was directed at military drills and Kim Jong- letter concerned COVID-19.

It's also worthy to note that North Korea that 7,000 people were being self-quarantined in the country. Until now, the regime has claimed no infections have yet been reported.

Considering the latest disclosure and Kim's letter, some observers believe North Korea may be struggling to contain the virus.

With no global support flowing in, Pyongyang may be signaling its intent to seek inter-Korean cooperation in quarantine efforts, which President Moon had already proposed.

If such cooperation does take place, it could affect the current stalemate in cross-border relations.

In fact, in the letter, Kim also remarked on Korean Peninsula affairs while President Moon had previously called for inter-Korean projects such as tourism and connecting roads and railways and also for dialogue to resume between North Korea and the U.S.

However, the Seoul government remains cautious. The Unification Ministry has responded positively to Kim's warned against over-interpretation and having rosy prospects inter-Korean cooperation.

The ministry said there has been no request from the North for support in quarantine nor has there been any detailed discussion with regard to such  cooperation.

The ministry added the government will make relevant decisions by taking into account all the situation at home and overall Korean affairs.