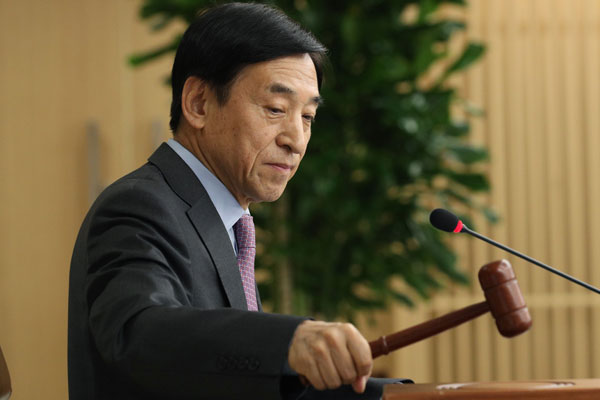 The Bank of KoreaBOK) has slashed its key interest rate by half a percentage point to deal with the economic ramifications of the pandemic.

The central bank held an emergency monetary committee meeting last Monday and cut the policy rate to zero-point-75 percent from one-point-25 percent. It's the first time the nation’s benchmark rate has dipped below one percent.

The only two other times the BOK convened an emergency meeting for a rate cut were in the wake of the 9/11 attacks and during the 2008 global financial crisis.

Announcing the rate decision, the bank said the pandemic has deepened concerns of a global economic slowdown as volatility has sharply increased in stock and currency markets at home and abroad, while oil prices have tumbled.

The BOK said it believes it is necessary to expand fiscal easing to help reduce financial fluctuations, knock-on effects on economic growth and inflation, and market uncertainties.

In a news conference after the rate adjustment, BOK Governor Lee Ju- said the virus is spreading fast and wide and its economic impact will have longer term effects than expected which led the bank to conduct the rate cut.

He said borrowing costs for vulnerable sectors, small-scale self-employed people and small and medium-sized businesses must be lowered as much as possible.

The latest move came after the U.S. cut its benchmark interest rate by a full percentage point to zero-point-25 percent in its second emergency rate cut in less than two weeks.

The BOK was originally thought to follow suit Tuesday or as the second U.S. was carried out Sunday, it made its move on Monday.

COVID-19 is currently spreading rapidly in Europe, the U.S. the Middle East with China and Asia no longer the key epicenter of the outbreak.

It has also reached Africa, Latin America and Oceania. World countries are sealing off borders and restricting movement and activities are at a standstill.

Financial markets are in panic and economic conditions are teetering near a critical point.

The repercussions are projected to be much greater than past infectious diseases or financial crises.

The Bank of Korea froze its key rate in February but following the U.S. , it has now cut its rate by not a half a percentage point.

Though belated, it's viewed as a positive move.

The rate cut along with the extra budget approved in parliament is expected to ease financial jitters and the economic fallout to some degree but whether it's enough is unclear.

Many believe a further rate cut is not likely, due to side effects that it may increase household debt and raise home prices.