PM: History Made Possible through Sacrifice of War Veterans 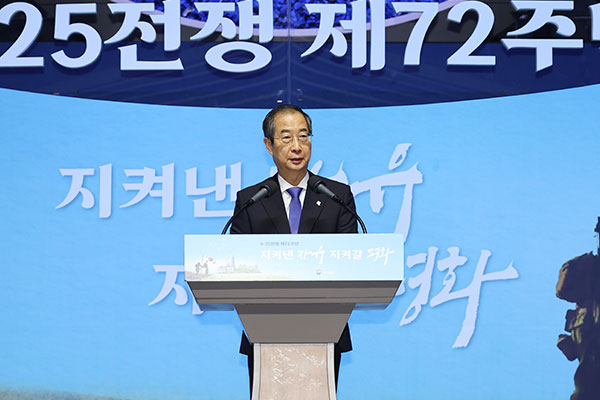 Prime Minister Han Duck-soo on Saturday said the entirety of South Korea's history was possible through the courage and sacrifice of war heroes who will never be forgotten.

In a ceremony marking the 72nd anniversary of the outbreak of the Korean War, Han said the war claimed the lives of 175-thousand UN and South Korean troops while ten million South Koreans were separated by the war.

He said the conflict left an indelible scar and pain in the hearts of the Korean people.

But he said that rising from the ashes, South Korea stunned the world by transforming from the poorest country into a top ten economic powerhouse.

Citing the success of Korean cultural content, semiconductors and the recent launch of a homegrown space rocket, the prime minister said the country's history as a whole was possible thanks to war veterans who dedicated their lives to defend freedom and peace.

He promised better support for bereaved families so they can lead more honorable lives.

On North Korea, Han said the regime's nuclear and missile threat was intimidating even regional and global peace and emphasized that peace comes on the foundation of strong defense and security.

He said the government will strengthen its defensive posture based on a firm alliance with the U.S. and respond to provocations swiftly and sternly using all means necessary.

He said Seoul will also seek diplomatic efforts and provide humanitarian assistance to the North.

North Korea also marked the anniversary with a series of anti-U.S. rallies.

The KCNA cited speakers from youth and farmers groups saying the U.S., still bent on war games, will be mercilessly punished if it forgets history's lessons and brings upon a war, and the North must not lower its guard.

The ruling party newspaper Rodong Sinmun also reported on the events, stressing the 1950s spirit of protecting the homeland.

The Korean Central Television said that laborers and students from across the country also paid visits to the tombs of the Korean War dead.

It's believed to be the first time in five years that the North has staged anti-U.S. public rallies around the Korean War anniversary.