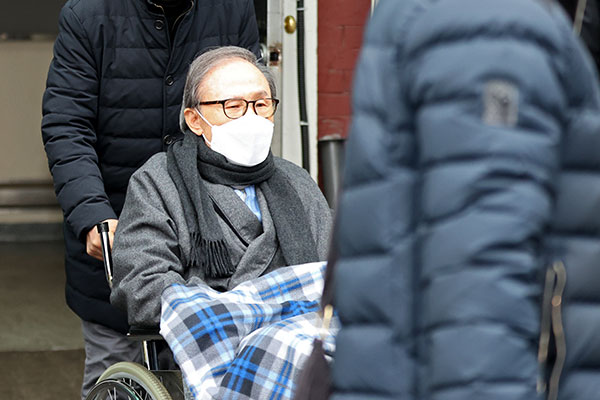 The prosecution has suspended the prison sentence of former President Lee Myung-bak for three months in consideration of his health.

The Suwon District Prosecutors’ Office said on Tuesday that it decided to accept the former president's request for a suspended sentence during a review meeting earlier in the day based on the potential risk of damage to his health.

The 81-year-old former president, who has been serving a 17-year sentence for corruption charges at the Anyang Correctional Institution, has been in and out of the hospital for diabetes and other chronic diseases. He filed the request earlier this month citing health problems.

Lee was being treated at Seoul National University Hospital after being admitted last week.

Under the Criminal Procedure Act, a prison sentence can be suspended on seven grounds, including when there is concern that continued imprisonment may cause a severe deterioration in health or impose a risk of death. Such a suspension can also be granted in cases in which the convict is 70 or older or more than six months pregnant.

Lee had previously requested a suspension of his prison sentence in December 2020, citing concerns about becoming infected with COVID-19, but his request was denied.

Lee on Thursday was discharged from hospital and sent home.

According to Lee’s legal representative Kang Hoon on Thursday, Lee arrived at his residence in southern Seoul, as doctors had concluded earlier in the day that he could receive outpatient treatment.