South Korea, China Discuss Establishing Military Hotline between Each Other 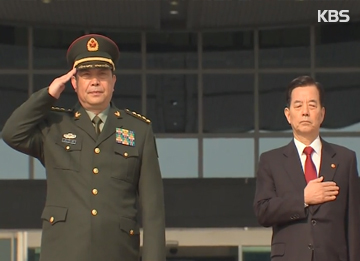 The defense chiefs of South Korea and China have agreed to set up a military hotline to enhance strategic communication. The agreement was made on Wednesday during talks between Defense Minister Han Min-koo and his Chinese counterpart Chang Wanquan, who visited South Korea for a three-day trip.
The two sides are expected to begin working-level discussions next week on establishing the hotline.
Chang is the first Chinese defense minister to visit South Korea in nine years, and he had an extensive discussion with Han about bilateral military cooperation, including issues related to North Korea. However, establishing a military hotline garnered the most media attention.
A military hotline helps prevent an accidental armed conflict. Military experts in South Korea have raised the possibility of accidental clashes with neighboring countries over the expanded air defense identification zone (ADIZ).
Currently, the only countries South Korea has military hotlines with are the United States and Japan. Military experts say that China becoming a third hotline partner for South Korea will indicate significant progress in the military cooperation between the two countries.
It is not the first time the two countries discussed the issue. South Korea has tried to set up the direct military contact channel with China since 2007, but China had been passive about the matter with concerns of a potential impact on its relationship with North Korea.
The South Korean government also expects a military hotline with China to enable swift and close communication between the top commanders of South Korean and Chinese militaries over North Korean issues. It would therefore contribute to the stability of the Korean Peninsula.
Meanwhile, the South Korean and Chinese defense ministers also reaffirmed their commitment to denuclearization of the Korean Peninsula and peace and security in the region.
During the talks, Minister Han made it clear that South Korea would sternly respond to any provocation by North Korea.
During the rare defense ministerial meeting, Seoul and Beijing also agreed on the return of the newly found remains of 68 Chinese soldiers. In March last year, Seoul repatriated the remains of 437 Chinese soldiers killed during the Korean War on humanitarian grounds.
Share
Print
List