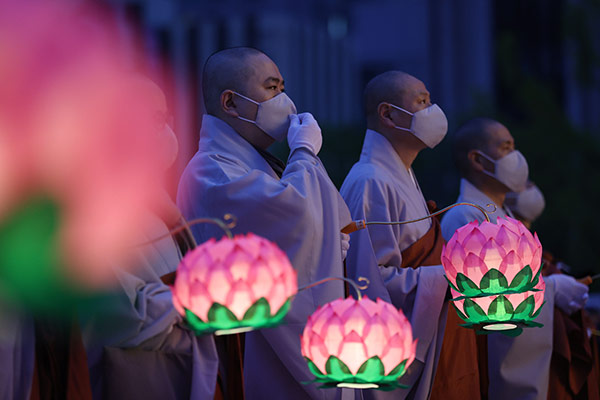 Buddha’s birthday falls on April 30, this year. While Buddhist ceremonies usually held in temples across South Korea on this day have been postponed for a month, many might wonder if the socialist state of North Korea also marks Buddha's birthday. It is widely known that there is no freedom of religion in North Korea. But Buddhist rituals and events, including Buddha’s birthday, are said to be held at temples in various parts of the communist country.

Today, we’ll learn about Buddhism in North Korea from Professor Chung Eun-chan at the Institute for Unification Education.

As Buddha’s birthday is not a holiday in the North, only a limited number of Buddhists designated by the state can participate in relevant ceremonies. Unlike in South Korea, those events have the purpose of showing the outside world that North Korea guarantees freedom of religion. They are also aimed to conduct exchanges with global Buddhist communities.

On the surface, Buddhism does exist in North Korea and the nation advocates the Jogye Order, one of the Buddhist sects.

In 2018, the Database Center for North Korean Human Rights based in Seoul conducted a survey on 13,349 North Korean defectors who resettled in South Korea. When they were asked if people in North Korea were free to engage in religious activities, 99.6 percent of the respondents said no. They said that some North Koreans were even punished for such activities.

In Article 68 of its constitution, North Korea stipulates that citizens have freedom of religion. It notes that the right is granted by approving the construction of religious buildings and the holdings of religious ceremonies. The constitution also notes that no one may use religion as a means of drawing in foreign power or destroying the state or social order.

North Korea approves operations of religious groups such as the Korea Buddhist Federation and the Korean Christian Federation. This is in order to demonstrate that the nation recognizes freedom of religion. But people who belong to the religious associations have not chosen the occupation of their own free will. Rather, they simply carry out their jobs designated by the authorities. Religious activities in North Korea have the major purpose of maintaining the regime and promoting it outwardly.

In North Korea, Buddhist monks are, therefore, religious staff dispatched by the Workers’ Party. For exchanges with the outside world, the Department of Religion at Kim Il-sung University trains would-be religious officials.

North Korean monks do not shave their heads. They do not reside at temples, either, unlike their South Korean counterparts. They go to their temples every morning, wearing a suit, much like office workers who go to work. At temples, they change into outfits made for Buddhist priests. Most of them are married. No one chooses to stay single for the purpose of spiritual training.

South Koreans wouldn’t call North Korean monks Buddhist priests. They could be viewed as sort of temple managers. When foreign guests visit a temple, those at the temple will drape red robes over their black ceremonial garments to make themselves look like priests. That is, they change into the monk’s robes when major events are held. They hardly ever hold regular ceremonies, much less practice asceticism. They appear as monks on the outside, but they are certainly different from South Korean Buddhist monks in terms of roles and responsibility.

Before the division of Korea, there were more than 700 Buddhist priests in the northern part of the Korean Peninsula. But as of 2014, the number fell to 300. The Korean War and the nation’s persecution of religion are the main reasons for the decline in the number of Buddhist monks.

Before Korea’s liberation of Japanese colonial rule in 1945, over 400 temples were scattered throughout the northern part of the peninsula. But now, only about 60 temples are found in the North.

While the number of temples has decreased sharply, North Korea has been working hard to restore and renovate local temples. In 1956, for instance, it repaired the Pyohun Temple at Mt. Geumgang and the Songbul Temple at Mt. Jongbang. In 1961, the nation also restored the disaster-hit Jahye Temple in Hwanghae Province. Since the 1980s, North Korea has made even greater efforts to preserve temples. Professor Chung explains why.

In North Korea, Buddhist temples are regarded as cultural relics from the past, rather than places of worship. So, protecting temples is an act of preserving cultural assets. Religious officials are nurtured at the Department of Religion at Kim Il-sung University.

It is important to examine the history from the past and preserve it. That’s because North Korea uses the past history as a tool of propaganda to highlight the current regime. Through Buddhist temples, North Korea also seeks to show the outside world that it is a normal state, where religions are not suppressed. It uses temples as a channel, through which it receives international aid.

As Professor Chung explains, North Korea does not see temples from a religious perspective but perceives them as a resource for regime maintenance and communist propaganda. The restoration of temples is, therefore, a mere act of repairing cultural properties and developing tourist attractions. So, Buddhism in North Korea remains an empty shell, void of substance. Here’s hoping that freedom of religion is truly ensured in North Korea as early as possible.