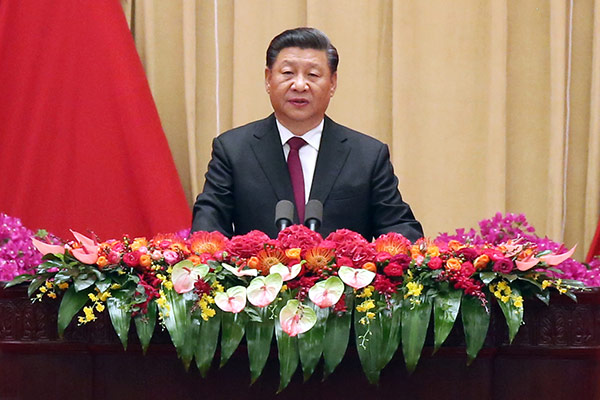 China celebrated the 70th anniversary of its foundation on Tuesday, October 1st. The People’s Republic of China was founded on this day back in 1949, after the Communist Party defeated the Nationalist Party in a civil war. On this significant occasion, China demonstrated its power through its largest ever military parade.

As one of the world’s two largest economies, along with the U.S., China has also been expanding its influence on Korean Peninsula issues.

Key Chinese officials, including Foreign Minister Wang Yi, have always said that China is a major player directly involved in Korean Peninsula issues, indicating that Beijing places great importance on these regional topics. Historically, China wielded considerable power on Korea. It lost its influence in the early 20th century but once again exerted a strong presence on the Korean Peninsula after the creation of communist China following World War II. China has achieved nearly double digit on-year growth over the last forty years on the back of its successful reform and openness drive that was initiated in 1978. Most recently, with Xi Jinping rising to power, China is seeking to reclaim and demonstrate the status of the world’s top power by using Korean Peninsula issues.

China calls itself “a directly concerned party” whenever talking about Korean Peninsula issues. That means these issues have a major impact on Beijing’s diplomacy and security. In particular, Beijing has showed off its close relationship with Pyongyang.

There is a Chinese proverb that says “If you have no lips, your teeth will be cold.” It means that if one collapses, the other will be in danger. The idiom describes the relations between North Korea and China pretty well. China participated in the Korean War in the early 1950s to back North Korea and fight the U.S.-led coalition. In other words, North Korea and China have a “blood alliance.” North Korea is the only country with which China has signed a mutual defense treaty.

But after the end of the Cold War, North Korea began to take its own path. Beijing strongly advised Pyongyang to pursue reform and openness so that it could achieve economic development while still maintaining one-man rule. But the North made a different choice by developing nuclear weapons, making its relations with China uncomfortable. North Korea hoped to improve ties with China right after current leader Kim Jong-un came to power in December of 2011. But the North’s continuous nuclear and long-range missile tests, which it called satellite launches, worsened Sino-North Korea relations. Kim Jong-un and Xi Jinping never held a meeting until 2018.

After the Korean War, China provided North Korea with massive resources and personnel for the latter’s rehabilitation. Their strong relations led to the signing of the Treaty of Friendship, Cooperation and Mutual Assistance in 1961. Of course, the two countries suffered from conflict as well, as North Korea pushed ahead with nuclear and missile tests in defiance of China, while Beijing joined U.N. Security Council’s sanctions against Pyongyang.

But this year, which marks the 70th anniversary of the establishment of diplomatic ties between the communist allies; their relations are closer than ever before.

China hopes to secure its presence in Korea’s peace process regarding the North Korean nuclear issue and North Korea-U.S. relations. As China and the U.S. are competing for supremacy, China is seeking to use North Korea as a means of expanding its influence.

North Korea, for its part, needs to draw support from China to strengthen its bargaining power, ahead of prospective negotiations with the U.S. It is also necessary for the North to improve ties with China, amid difficulties stemming from harsh sanctions imposed by the U.N.  Since both sides need each other their relations have become warmer and closer.

Beijing and Pyongyang are demonstrating their intimate relationship both inside and outside their countries. Kim Jong-un visited China three times last year alone and traveled again to China earlier this year, while Xi Jinping visited Pyongyang in June for the first time since he took office in 2013.

China is under political, economic and diplomatic pressure from Washington so it finds it necessary to enhance its negotiating power by using North Korea as leverage. Pyongyang absolutely needs help from Beijing, as it has to negotiate with the U.S., the world’s foremost superpower.

Since North Korea and China are using each other as negotiating cards, Beijing is emerging as an important factor that may affect Korean Peninsula issues.

China has been determined to revive its past glory and increase its presence, at least in Northeast Asia, by waging a fierce competition for hegemony with the U.S. Xi is seeking the so-called “China Dream,” a vision of the country’s reemergence as a political and economic power. In the midst of the ongoing battle for supremacy between Beijing and Washington, China wants to change the previous U.S.-led framework when addressing Korean Peninsula issues. This is Beijing’s new strategy, and it could be a risk factor for regional diplomacy.

As China is increasing its influence in the region, the process of finding a solution to North Korea’s denuclearization has become more complicated. Previously, it was a matter between the two Koreas and the U.S. But now, another factor has been added to the existing structure.

In fact, the six-party nuclear negotiations exist in name only, as summit talks between Pyongyang and Washington are playing a major role in addressing the North Korean nuclear issue. Now, only four parties—the two Koreas, the U.S. and China—are considered as the directly involved countries.

The other two members of the six-party talks, Russia and Japan, are believed to have been left out in the cold.

If Kim Jong-un visits China this month, Beijing’s role and status will be reinforced even further.

It is possible that Kim Jong-un may visit China around October 6th, which will mark the 70th anniversary of the establishment of diplomatic relations between North Korea and China. Last year, Kim visited China before important negotiations with the U.S. The North and the U.S. are showing signs of resuming working-level talks, in which Pyongyang will play for high stakes. So, the North Korean leader may travel to China prior to the crucial talks.

Both North Korea and China will celebrate this year’s anniversary in a big way as the socialist states attach great significance to every tenth anniversary. Aware of its conflict with the U.S., China may embrace North Korea in a more pronounced way than usual. Kim’s first visit to China, if realized, will allow Beijing to show to the U.S. that it can exercise leverage over North Korea. In doing so, China will attempt to gain the upper hand at negotiations with the U.S.

Kim’s visit to China and closer cooperation between North Korea and China will lead to more negotiating power for Beijing. China is trying to strengthen its position on the Korean Peninsula by stressing the “China Dream.”

The emergence of China, a major factor in regional diplomacy, is expected to prompt involved countries to engage in intensive diplomacy to resolve the denuclearization issue, which has now become even more complex.