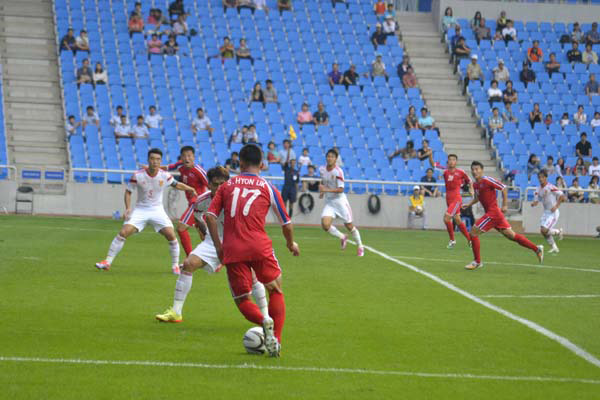 The South Korean national football team will take on North Korea in Pyongyang on October 15th for a 2022 FIFA World Cup qualifying match. It will be the first time the South Korean men’s national team has traveled to the North Korean capital for a World Cup qualifier. The game will take place at the Kim Il-sung Stadium, which is expected to be filled with 40-thousand North Korean spectators. It is said that North Korea is as enthusiastic about football as its southern neighbor. Today, we’ll talk about football in North Korea with Seong Mun-jeong, senior researcher at the Korea Institute of Sport Science.

The two Koreas have competed in qualifying matches for the 1990, 1994 and 2010 World Cups, held in Italy, the U.S. and South Africa, respectively. After nearly ten years, an inter-Korean World Cup qualifier will be held in Pyongyang next week.

Although South Korea has dominated the rivalry in the past 16 matches with seven wins, one loss and eight draws, North Korea is still a formidable opponent. In the second round of the Asian qualifiers for the 2022 World Cup, the North currently leads their qualifying group following victories over Lebanon and Sri Lanka last month.

North Korea obtained FIFA membership status in 1958 and made its debut on the international stage. At the 1966 World Cup in England, North Korea shocked the world with a 1-0 win over Italy to progress to the quarterfinals. At the 2010 World Cup in South Africa, the North was able to score a goal against the world heavyweight Brazil to show off its sporting prowess.

Under the instruction of former North Korean leaders Kim Il-sung and Kim Jong-il, the nation selected particular sporting events gave the North a chance of doing well on the international stage. The North has intensively nurtured those events which include football, judo, weightlifting, marathon and shooting. State policies supporting the events have actually motivated North Korean athletes to stage brilliant performances in the international arena. Football, in particular, has been a popular sport in the North, as people can fully enjoy it without any special equipment, as long as they have a ball and space.

North Korea sends its athletes to international competitions in only 22 events, less than half of the 49 sporting events found in the nation. That’s because the impoverished country cannot afford to support all the events.

Rather, it is focused on sports that suit North Korean body types, such as shooting, marathon, football, table tennis and wrestling. Football, among others, is a low-cost, highly efficient sport that does not need much equipment but is loved by many people. In addition, international football games can satisfy North Korean residents’ curiosity about the outside world. For these reasons, the North gives special treatment to football players who compete well in international matches.

North Korean athletes who win international competitions are given honorable titles, including “hero” and relevant benefits. “People’s sportsman” is by far the highest title in the sporting field and it is conferred on those who win a gold medal at the Olympic Games or World Championships. In addition, they are entitled to old-age pensions or receive apartments in Pyongyang where they can live with their families. They may get a car or prize money as well. For these great benefits, athletes try very hard to win international games.

Depending on the medals they have won at international competitions, North Korean athletes may earn different titles such as “sporting master,” “people’s sportsman,” “hero of endeavors” and “hero of the republic.” They can live in an apartment complex that was built in Pyongyang in 2013 to accommodate athletes only. Under the instruction of leader Kim Jong-un, the Rungrado May Day Stadium has been renovated as a modern football stadium.

North Korea also opened the Pyongyang International Football School in 2013 to promote early football education. The school selects talented children aged between 7 and 13 as well as teenagers from across the country after a rigorous screening process of five rounds of tests. Equipped with natural grass fields and artificial turf as well as other great facilities, the school provides excellent meals to students and invites coaches from football powerhouses like Spain and Germany. To help the students go global, the school offers them foreign language education and even sends some of the best students to Europe. Thanks to the authorities’ full support, North Korean football players have expanded their presence overseas.

Some North Korean football players have made their ways to foreign clubs after receiving early childhood education at the Pyongyang International Football School. North Korean striker Han Kwang-song(한광성), who now plays in Italy’s Juventus football club, is a good example. Another North Korean professional footballer who plays in a European club is Pak Kwang-ryong(박광용), while several other players, including Jong Chang-bom(정창범) and Lee Chol-song(이철성), are known to have joined the Serie A in Italy.

Han, in particular, is compared with South Korea’s Son Heung-min, and is drawing attention from the English Premier League. The transfer fee for this excellent player is reported to reach between 5 and 15 million euros.

Several young North Korean players have signed to European clubs. Han Kwang-song is an example of the success of North Korea’s youth football education. The 21-year-old attended the Pyongyang International Football School and proved his ability at the Under-17 World Cup in 2015. Two years later, he made his appearance in Italy’s top football league, Serie A.

North Korean footballers who play in foreign clubs, including Han and Jong Il-kwan(정일관), will face famous South Korean players such as Son Heung-min and Lee Kang-in at the World Cup qualification match next week. The inter-Korean football game in Pyongyang is raising expectations for the resumption of cross-border dialogue.

Relations between South and North Korea froze for about ten years after the shooting death of a South Korean tourist at Mt. Geumgang in the North in 2008. Even during this chilly period, the two sides still held exchanges in football.

Many Koreans remember the Seoul-Pyongyang football competition that was held in the two cities on nine different occasions from 1929 to 1946. It is one of the rare events that people in both sides of the border could relate to each other emotionally, and I believe they are eager to revive this. The two Koreas have conducted various other exchange programs, including football events for workers or teenagers. When watching football games, Koreans applaud, shout and cheer, whether the players are from the South or the North. Given the special significance of football for Korean people, I’m sure the sport can serve to advance the promotion of cross-border exchanges.

The first inter-Korean football match on North Korean soil in 1990 paved the way for South-North exchanges. In a similar way, the upcoming World Cup qualifying game in Pyongyang will hopefully contribute to breaking the current deadlock in cross-border ties.

(Next week, we’ll talk about gaming culture in North Korea.)