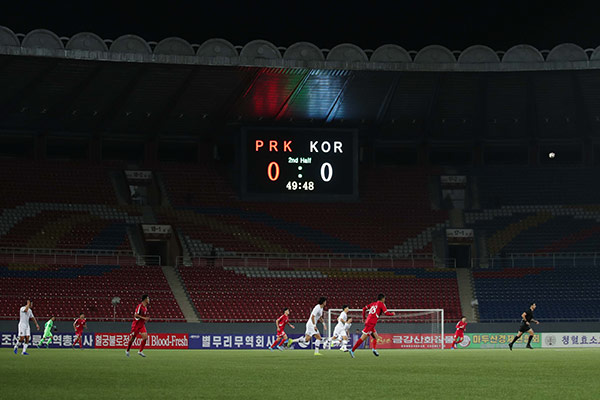 South and North Korea held a qualifying match for the 2022 FIFA World Cup at the Kim Il-sung Stadium in Pyongyang on Tuesday. The match ended in a scoreless draw. It was the first-ever inter-Korean World Cup qualifier to be held in the North Korean capital.

Unfortunately, the rare football game between the two Koreas failed to provide any momentum to mend cross-border ties, as North Korea refused to allow the match to be broadcast live and also denied entry to South Korean reporters and cheering squads.

It would have been better for South and North Korea to hold a friendly match. But the two sides were in no condition to do that, given the current deadlock in bilateral relations. In fact, the South Korean side had been anxious about the World Cup qualifying match in Pyongyang because North Korea remained silent about the game’s schedule for too long.

Still, it is significant that the South and the North made contact for a preliminary match of an international sporting event. It was the first game held in the North Korean capital between the men’s football teams of the two Koreas after they last played a friendly match at the May Day Stadium in Pyongyang in October of 1990.

On top of the importance of securing a ticket to the World Cup, Tuesday’s inter-Korean face-off was highly significant. But it wasn’t easy for the South Korean national football team to make it to Pyongyang. Initially, North Korea notified the Asian Football Confederation(AFC) on August 2nd that it would host the match in Pyongyang. But it was not until September 24th that the final schedule was set. Even after that, the North remained uncooperative and indifferent.

It was a very unusual game. North Korea had to host the qualifying match anyway but it seemed to be wary of holding an inter-Korean game amid the soured relations between the two countries.

It seems South Korean athletes and officials were under strict restrictions when they entered North Korea due to U.N. sanctions against the regime. For instance, they were not allowed to bring their mobile phones to North Korea. Most of all, they weren’t sure, until late last month, whether they would travel to Pyongyang. So they left for North Korea rather hurriedly. It seems to be difficult even to carry out sports exchanges with North Korea, which is under sanctions.

The South Korean football team boarded a plane in Beijing on Monday and left for Pyongyang. But they had to leave their mobile phones behind, due to regulations concerning goods that could be brought in to North Korea.

In addition, South Korean journalists and cheering groups were denied access to the game. Agencies including the Korea Football Association(KFA) repeatedly requested North Korea to provide assistance for the South Korean team and visitors, but the North never gave a response. Most importantly, there were no spectators in the stands during the match.

North Korea has refused to engage in dialogue with the South and told South Korean President Moon Jae-in to stop acting like an “overstepping mediator.” In this situation, North Korean authorities were probably at a loss how to explain the South Korean football team’s visit to Pyongyang for a World Cup qualifier to their citizens. They couldn’t cancel the game unilaterally, either. So the North chose to host the game in the absence of spectators. An international football match without fans in the stands is a very strange scene.

Initially, North Korea had said that thousands of spectators would fill the stadium. But it turned out that the seats in the stadium were completely empty. There was also no live broadcast of the match. AFC officials attending the game relayed match updates to the AFC headquarters through their mobile messengers and the information was delivered to the Korea Football Association, which then posted on social media and informed South Korean reporters of the news.

North Korea handed over a DVD copy of the game to the KFA just before the South Korean team departed Pyongyang. It comes as little surprise that BBC News described the inter-Korean match as the “world’s strangest football derby.” The restrictions placed on reporters and lack of fans in the stands can be attributed to the uncomfortable relations between Seoul and Pyongyang.

North Korea is seemingly avoiding dialogue with the South until its negotiations with the U.S. gain traction. In Article 5 of the Pyongyang Declaration signed by the leaders of the two Koreas on September 19th last year, North Korea expressed its willingness to continue to take additional measures toward denuclearization, including the permanent dismantlement of nuclear facilities in its key Yongbyon complex. Based on the North’s promise, South Korea worked hard to facilitate talks between the North and the U.S.  But after the second North Korea-U.S. summit collapsed in Hanoi in late February this year, Pyongyang says that it lost confidence in Seoul’s mediating role.

South and North Korea managed to form a reconciliatory mood around the PyeongChang Winter Olympics early last year. Athletes from the two Koreas entered the stadium together during the opening ceremony of the Winter Games, while the two sides fielded a joint team for women’s ice hockey—the first unified Korean team in any sport in Olympic history. North Korean leader Kim Jong-un’s younger sister Kim Yo-jong, first vice director of the Workers’ Party, attended the opening ceremony of the Winter Olympics. All these positive developments contributed to defusing tension, which had been escalating in 2017 when North Korea went ahead with its sixth nuclear test.

However, North Korea has no intention of improving ties with the South for now, and this attitude was reflected in the recent inter-Korean football game. It seems important for Seoul to continue to express its commitment to dialogue in order to break the deadlock in cross-border relations, which have been strained since the no-deal summit between North Korea and the U.S. in Hanoi.

Kim Jong-un is pressed for time. In his policy speech at the Supreme People’s Assembly in April, he said that North Korea would take a different path, urging the U.S. to return to the negotiating table with a new calculation by the end of the year. Apparently, however, taking a different path is not what he really wants. As the year-end deadline draws near, the North Korean leader stands at a crossroads. He must now choose whether to take a different path. Against this backdrop, inter-Korean relations are likely to remain stalled until the year’s end. In the meantime, Seoul needs to make preparations to engage Pyongyang, especially in economic areas.

South and North Korea are expected to hold another World Cup qualifying match in February next year, this time in Seoul, as the two teams are required to play each other twice in a home-and-away format for the regional qualifiers. In other words, the North Korean football team has to travel to Seoul. Just as the 2018 PyeongChang Olympics initiated a peace process on the divided peninsula, sporting events next year could provide unexpected momentum for a better relationship between the two Koreas. South Korea should make consistent efforts toward that goal.

As North Korea-U.S. negotiations have made little progress and inter-Korean dialogues are showing no signs of resuming, private exchanges are considered all the more important. North Korea has officially invited the South Korean team to the 2019 Asian Youth and Junior Weightlifting Championships that will kick off in Pyongyang on October 20th. Hopefully, both Koreas will be able to keep their sports exchanges alive and create a reconciliatory mood.