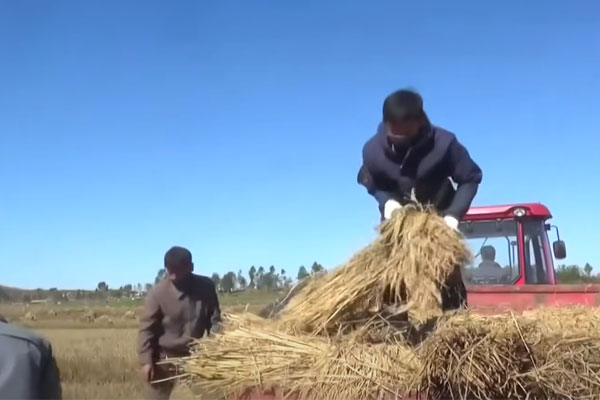 North Korea’s food shortage has long been pointed out by many groups and organizations in South Korea and overseas.

In its Crop Prospects and Food Situation Quarterly Report released this month, the FAO categorized North Korea as a country with “widespread lack of access” to food and included the country on its list of 44 nations that need external assistance for food. The U.N. agency pointed out that a large proportion of the North Korean population suffers from low levels of food consumption and poor dietary diversity. North Korea has been classified as a country in need of food aid since the FAO began to conduct relevant study in 2007.

In the past, North Korea provided an average 600 grams of food per person a day. After the economy worsened, the North gradually lowered the daily food rations, which are now estimated at 400 grams a person.

The FAO publishes its World Food and Agriculture Statistical Yearbook based on research on malnutrition and food supply situations around the world. It shows that as many as ten-point-nine million people in North Korea, or 42-point-four percent of the population, suffered from undernourishment from 2018 to 2020. The percentage is pretty high, compared to the global average of eight-point-nine percent.

North Korea has seen its economic difficulties worsen further in recent years, due to harsh international sanctions, natural disasters and the border closure triggered by the COVID-19 pandemic. Agricultural output has been affected, of course, generating speculation that the country’s food shortage will become even more serious.

On the whole North Korea’s food production has been on the decline or stagnant over the last ten years. How can the country’s chronic food shortage be explained?

I wouldn’t say North Korea’s food problem has suddenly deteriorated because of sanctions or the pandemic. Rather, North Korea’s agriculture has a structural problem of low productivity. Without reform measures including the introduction of incentives, productivity won’t sharply increase. Also, the agricultural sector finds it hard to secure enough materials and equipment needed for farming amid the prolonged economic difficulties. So, without an improvement in the economy, North Korea’s agricultural output will continue to remain low and its food shortage will persist.

North Korea’s harvest chart shows that crop production plunged in particular years when typhoons, floods or drought hit the county. That’s not the case in advanced farming. Due to the poor infrastructure, North Korea’s agriculture is vulnerable to natural disasters and climate change.

Unlike the previous ideology-based agricultural policies, those introduced in the Arduous March period were tailored for practical purposes. For example, North Korea attempted to diversify crop varieties so the impact of natural disasters on the farming industry would be limited. The country focused on potatoes, in particular. It is difficult to produce high-quality, virus-resistant potato seeds. South Korean agricultural specialists provided support in this area, contributing to the successful expansion of potato cultivation in the North. North Korea also carried out a policy of raising more farm animals that feed on grass, not grains, since grains are also consumed by people.

Thanks to the pragmatic policies, North Korea’s agricultural production increased slowly in the early-and mid-2000s, recovering from the previous drastic fall in output.

Unfortunately, however, North Korea’s food situation did not recover to the state before the Arduous March. In April 2012, right after Kim Jong-un took power, the leader expressed his strong commitment to solving the food problem, declaring that the people of North Korea would no longer have to tighten their belts.

He proposed various reform measures, including a North Korean-style economic management system and the restoration of devastated forests. In agriculture, he stressed the need to incorporate science and technology into farming, such as the construction of smart farms using information and communication technology.

Presiding over a plenary meeting of the central committee of the ruling Workers’ Party last June, North Korean leader Kim Jong-un made a rare acknowledgment of food shortages in his country. At the time, Kim stressed the need for food production, even saying that having a good harvest is a militant task the state must fulfill as a top priority.

In his policy speech at the Supreme People’s Assembly last September, the leader also emphasized the importance of coping with disastrously abnormal climate conditions in agriculture.

The problem is that all those measures require capital, technology and manpower, which North Korea lacks. For that reason, it will be difficult for the North to actually implement the measures in farming areas.

“Agriculture” was, again, one of the key agenda items at the plenary session of the party’s central committee last December. Leader Kim Jong-un pledged to completely resolve the food problem within ten years and announced a plan to build a new, socialist farming community. Local media outlets have covered relevant stories since early this year.

Notably, North Korea tries to promote the consumption of white rice and flour by changing the grain production structure. The country emphasized corn production in the 1960s and expanded potato farming in the 1990s. And now, it turns its eyes to wheat cultivation. Researcher Kim explains why.

North Korea’s emphasis on wheat production is rather unexpected. It calls for doubling wheat cultivation and consuming more food products made from flour. It is believed that corn and potato farming contributed to improving North Korea’s food situation to some extent. But I doubt that wheat will play the same role. In wheat cultivation, seeds are planted in fall or winter and harvested in early summer. Growing wheat means expanding double cropping. North Korea wants to use fields that remain uncultivated. After harvesting wheat, local farmers have to engage in rice and corn farming. But I’m wondering if North Korea can handle the rising demand for energy, farming machines and labor.

Another reason for promoting wheat production is that North Korea finds it difficult to import flour because global flour prices have soared. Local wheat production might be a temporary measure to solve the difficulty in flour imports. We’ll have to wait and see how things will turn out.

At present, North Korea’s food problem seems to be more severe than ever before and more serious than any other issue. North Korea has been eager to implement its agricultural policies since early this year to reflect the changing consumption patterns of local citizens and remedy the structural shortcomings in agriculture.

However, it appears that the series of farming policies are simply inadequate to address the country’s long-standing food shortage problem. Analysts say North Korea needs to find fundamental solutions, such as the introduction of the policy of openness and exchanges with the outside world.

As more than 40 percent of its population suffers from malnutrition, North Korea needs to receive food aid in the short term. If the North gets food assistance from South Korea for a year or two, it may take care of the most urgent problem. If North Korea also receives fertilizer aid, its agricultural output will increase.

Basically, however, the North needs to adopt the policy of openness and conduct exchanges with South Korea or other countries. If North Korea manages to attract investment in agriculture, the local farming industry will change remarkably and the country will have an opportunity to resolve its food problem on its own. I do hope so.

North Korea is likely to continue suffering from a food shortage this year. Long-term prospects are also grim. The chronic food shortage cannot be resolved simply by a few policies. Reform and innovation must come first in North Korean society overall.