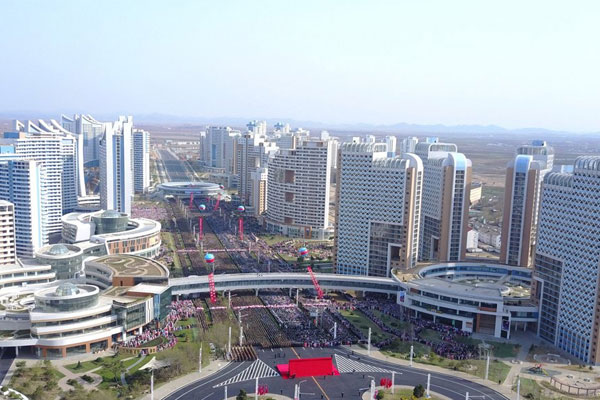 In February this year, North Korea broke ground to build ten-thousand homes in the Hwasong area in Pyongyang. During the eighth congress of its ruling Workers’ Party in January last year, the North announced its plan to construct a total of 50-thousand homes in the capital by the year 2025 or ten-thousand units each year. Under the plan, apartment complexes are under construction now. Just like in South Korea, apartments are said to be the most common type of housing in North Korea.

Today, we’ll learn about North Korean apartments from Professor Jeon Young-seon from the Institute for the Humanities and Unification at Konkuk University.

This is a scene from a 2006 North Korean film titled The Schoolgirl’s Diary that was screened at the Cannes Film Festival.

In the film, a teenage girl named Su-ryeon is dying to move to an apartment. For this reason, she is even at odds with people around her. It is said that people in North Korea all wish to live in an apartment, especially a luxurious one.

In North Korea, an apartment means urban life. In the narrower context, it symbolizes life in Pyongyang. In South Korea, apartments are named after particular apartment brands of construction firms. In the North, in contrast, many apartment names show where they are located, like Changjon(창전) Street or Songhwa(송화) and Songsin(송신) districts. Some apartment names such as “apartments for faculty members of Kim Il-sung University” in Pyongyang show who live there. Meanwhile, terraced apartments along the Pothong River denote a particular type of housing.

In North Korea, a house symbolizes which class its dwellers belong to. North Korean houses are classified by five different grades—special grade, fourth, third, second and first. Houses with special grade are reserved for high-ranking officials, while general workers are provided with houses with first grade. That is, the lower the number or grade, the lower the class. In the North, apartments have political implications, as they are built and provided by the state. The political significance has become even clearer under the rule of current leader Kim Jong-un.

North Korea places great emphasis on science, as it believes science can provide a breakthrough in reviving its stagnant economy. Policies related to science and education have been strengthened since Kim Jong-un took power, as seen in apartments for faculty members of Kim Il-sung University, apartments for educators of Kim Chaek University of Technology and Mirae Scientists Street. Those housing units and streets show the Kim Jong-un regime’s policy and vision in an easy and clear way.

Famous news presenter Ri Chun-hee(리춘희) and leading journalists including the chief editor of the country’s official Rodong Sinmun newspaper were allowed to live in the terraced apartments on the bank of the Pothong River. The special, luxurious apartments are the envy of all North Koreans. The riverside residential district has a strong political tinge because it shows to the people that they can live there if they show loyalty to the state.

North Korea began to construct apartment buildings in earnest after the Korean War ended. During the war, major cities including Pyongyang were destroyed, while so many people lost their homes. North Korean founder Kim Il-sung concentrated on rebuilding the cities and paid attention to the massive supply of housing. Starting with the Workers’ Apartment that was constructed in 1954, North Korea began to build many apartments. In the early stages, the country wondered how to harmonize Western-style buildings with Korean traditional housing culture.

Socialist states in Eastern Europe assisted Pyongyang’s rehabilitation project. Influenced by the European heating system, new apartments in Pyongyang were equipped with radiators, not the traditional floor-heating system of ondol. People had shoes on indoors because the floor was cold. North Koreans were unfamiliar with the practice. As a result, Kim Il-sung raised the need to install ondol in apartments. In the initial stage, the system used channels under the floor, connected directly to the kitchen’s cooking fires. Later, houses were heated by hot water pipes running under the floor.

Given Korea’s traditional food culture, locals needed plenty of storage space for dishes and bowls of various sizes as well as multiple burners. North Korea took those problems into consideration when formulating its housing construction policy.

In its post-war reconstruction, North Korea found it important to build many homes in a short period of time. To construct houses quickly, the country employed the method of prefabrication.

North Korean media highlighted the so-called “Pyongyang speed,” claiming that the country could assemble a house in just 14 minutes.

North Korea needed to quickly build homes to accommodate many people, so “speed” was important. In housing construction, concrete curing takes time. But if building components like walls and floors are produced at factories and then assembled at construction sites, the construction period can be shortened drastically and new houses can be provided to people promptly. That’s why North Korea used this method, in which cranes lift and position prefabricated parts. The North claims that it could build a house in 14 minutes in this way, but it actually took much longer than that. Still, North Korea uses the expression “Pyongyang speed” as an exemplary achievement in construction.

North Korea began to groom Kim Jong-il as a successor to Kim Il-sung in the 1970s, when some major changes were seen in local apartments. North Korean media praise the ‘70s as a “great era of prosperity.”

When it comes to apartment construction, North Korea focused on “speed” until the 1970s. On top of speed, it began to emphasize the height and size in the 1980s, resulting in the construction of spectacular high-rise apartment buildings. Changgwang Street, which is dubbed Myeongdong in South Korea, is a typical example. The first section of the street was completed in 1980 and the second section in 1985. The street has a 30- to 40-story residential-commercial complex, which houses shops in the first and second floors.

The street was built in an area that had formerly been called Ryunhwanson(윤환선) Street, where two-to three-story low-rise apartment buildings were located. But the area was redeveloped to accommodate 17-thousand households. In the 1980s, North Korean apartment buildings became taller to house many more homes. Housing construction in Changgwang(창광) Street was the starting point.

Apartments in Changgwang Street seemed to have changed a lot from old apartments. But the new structures were not much different from old ones, in terms of the arrangement of buildings on straight lines.

Kim Jong-il’s architectural theory was fully applied to Kwangbok Street, the gateway to southwestern Pyongyang. Apartments were built there for the purpose of accommodating athletes participating in the 1989 World Festival of Youth and Students. The building exteriors were completely different from those of old apartments.

Various sports and lodging facilities were constructed in the area for the 13th World Festival of Youth and Students. South Korea showed off its remarkable economic development through the 1988 Seoul Olympics. Apparently having this in mind, North Korea carried out a large-scale apartment construction project in Kwangbok Street, which had previously been a wild plain, to demonstrate how advanced Pyongyang is. New buildings there boast sophisticated design, such as cylindrical towers and curving blocks. Building stories vary, ranging from an eight-story structure to a 42-story one. The construction project was completely different from previous ones, as the new apartments had the clear purpose of showing the great power of socialist North Korea to the entire world.

North Korean apartments faced another major turning point in 2012, when current leader Kim Jong-un rose to power. Changjon Street was completed in the Mansudae Area in Pyongyang in June 2012. The street has a number of high-rise apartments, including 45-story ones. Unha Scientists Street and the apartments for faculty members of Kim Il-sung University were built in 2013. The following year, Wisong Scientists Street and apartments for educators of Kim Chaek University of Technology opened. More new streets and housing units were constructed one after another, such as Mirae Scientists Street in 2015, Ryomyong Street in 2017, and the Pothong riverside terraced apartments and the Songhwa district in 2022.

North Korea has built new apartments in new districts almost every year since Kim Jong-un came to power. It is little wonder that apartments have become the political symbol of the Kim Jong-un era.

Top leaders of North Korea, generation after generation, have underscored “fight against imperialism” as their foreign policy. Regime founder Kim Il-sung established socialism amid his fight against Imperial Japan, while his son Kim Jong-il defended socialism through military-first politics. Current leader Kim Jong-un continues to build apartments to show to the U.S. imperialist that his country is building an ideal socialist city. In other words, North Korea wants to tell the outside world that it is building a great socialist country where people can live comfortably, regardless of international sanctions. Domestically, the North is seeking to revive the economy through construction projects.

Under Kim Jong-un’s rule, so many skyscrapers have appeared in Pyongyang to change the city skyline. The North Korean capital is even called “Pyonghattan,” a combination of “Pyongyang” and “Manhattan.” An 80-story apartment tower was built in the Songhwa district that was completed in April this year. Inside a rising elevator of the building, a reporter from a North Korean propaganda outlet stressed that the dignity of North Korean residents was heightened, commensurate with the super-tall building.

But North Korean citizens do not really prefer to reside in tall buildings, due to the nation’s chronic power shortage. According to a North Korean defector who lived in Pyongyang, it is inconvenient to live in a high-rise apartment and electricity is supplied only at set times even in Pyongyang.

North Korea is short of electricity all the time. New apartments require more energy sources. The country generates thermal power all year round and also uses solar power to supplement hydroelectric power generation that decreases in winter. Still, electricity is just not enough to run all the apartments. Providing electricity to homes is more important than constructing apartments. Residents in high-rise apartments have to walk up the stairs if they miss time for power supply and elevators do not work. No wonder people prefer lower floors of apartment buildings.

In North Korea, an apartment is living space, the symbol of desire and social status, and a reward for loyalty. The country promised to build 50-thousand homes in Pyongyang by 2025. It remains to be seen whether North Korea can proceed with the plan as scheduled and how satisfied local residents will be.