S. Korea, Kazakhstan to Cooperate on Opening Negotiations for FTA with EAEU 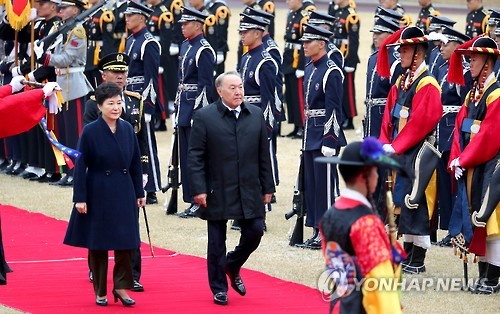 South Korea agreed with Kazakhstan, this year's chair of the Eurasian Economic Union(EAEU), to expedite negotiations for a free trade agreement(FTA) with the regional bloc.

The agreement was reached at summit talks Thursday between President Park Geun-hye and Kazakh President Nursultan Nazarbayev who is on a state visit to Seoul.

The presidential office said the two leaders adopted a joint declaration on improving bilateral relations and signed ten memorandums of understanding on economic cooperation. In particular, Park and Nazarbayev agreed to cooperate actively to open negotiations for an FTA between South Korea and the EAEU.

The two leaders also agreed to invigorate a joint economic committee which was raised to a minister-level organization during their talks in 2014 to monitor follow-up measures to the summit and to work on realizing cooperative projects.

In addition, the two nations discussed applying South Korean technology that allows the removal of impurities from coal without using water in Kazakhstan's coal mines and work toward signing a letter of intent for export.

The South Korean government also agreed to pursue new energy projects and the construction of a landfill on the occasion of the Astana Expo next year.

The presidential office said it hopes the MOUs will expand cooperation among the two nations' businesses so that more South Korean companies will be able to participate in Kazakhstan's construction and infrastructure projects.

Meanwhile, the two leaders condemned North Korea's nuclear tests and missile launches in the joint declaration and agreed to cooperate on responding to Pyongyang's nuclear ambitions.