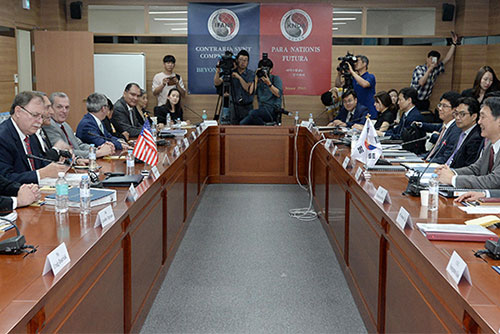 South Korea and the U.S. have started their sixth round of negotiations on sharing the cost of stationing American troops on the Korean Peninsula.

During the two-day session which began in Seoul Wednesday, senior officials from the two sides are expected to decide on new terms for the bilateral Special Measures Agreement(SMA), set to take effect next year.

Under the current five-year contract which will expire in December, Seoul's cost-sharing for stationing the 28-thousand-500-member U.S. Forces Korea for this year is set at around 960 billion won or 856 million dollars.

The latest negotiations come as Washington wants Seoul to shoulder a greater burden, including costs for "operational support" of deploying strategic assets from outside the peninsula to counter North Korean military threats.