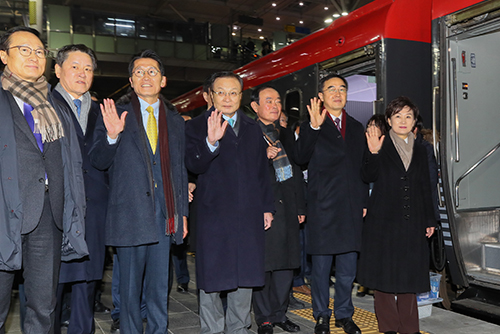 A special train carrying about 100 South Koreans has left for North Korea for a symbolic groundbreaking ceremony for a project aimed at modernizing and connecting roads and railways across the border.

The train carrying nine cars departed Seoul Station at 6:45 a.m. Wednesday for the ceremony set for 10 a.m. at Panmun Station in the North's border town Gaeseong.

The North's delegation will be led by Ri Son-gwon, the chairman of the Committee for the Peaceful Reunification of the Country. He will be joined by high-ranking North Korean officials including Kim Yun-hyok, the railway minister.

The 50-minute ceremony will feature events in which officials of the two Koreas will sign a sleeper, connect railroad tracks and unveil a road sign.

The South Korean delegation will return on Wednesday afternoon after a lunch at a lodging facility in the Gaeseong Industrial Complex.
Share
Print
List