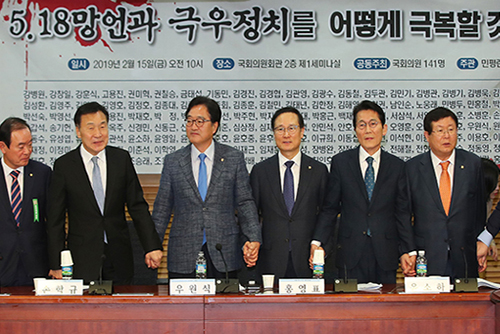 The floor leaders of four ruling and opposition parties have reiterated the call to expel lawmakers of the main opposition Liberty Korea Party responsible for remarks disparaging the 1980 Gwangju pro-democracy movement.

An emergency debate was held in parliament on Friday jointly organized by 143 bipartisan lawmakers. The topic of the discussion was how to fight criminally absurd remarks and far-right politics.

The participants also stressed that it's necessary to enact a law to ban historical distortions.

Ruling Democratic Party Floor Leader Hong Young-pyo said that the four parties must join hands to expel the three lawmakers by all means. Hong added that the Liberty Korea Party, which he accused of trying to turn back the clock of history, should be held accountable and judged.

Floor Leader of the Party for Democracy and Peace Chang Byoung-wan said the four parties must come together to expel the three lawmakers and pass a related law.

Justice Party Floor Leader Youn So-ha also stressed that it was the parliament's job to pass a law on preventing historical distortions so that similar mishaps will never occur again.
Share
Print
List