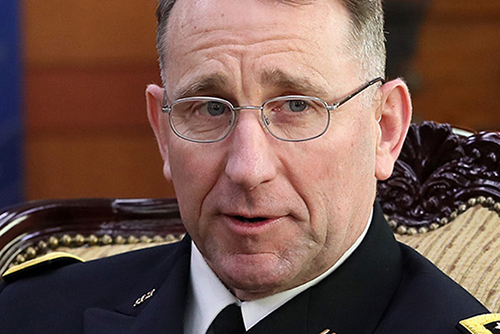 U.S. Forces Korea(USFK) Commander General Robert Abrams says the issue of U.S. troop presence in South Korea is not connected to any potential declaration of an end to the Korean War or a peace treaty with North Korea.

In a press release issued by USFK headquarters on Friday, the general said that America’s military presence on the Korean Peninsula reflects an ironclad alliance between Seoul and Washington.

He said that the "United States and Republic of Korea firmly agree on the importance of USFK for the peace and stability of the Korean Peninsula and region."

In a Senate hearing on Tuesday, Abrams was asked by Senator Angus King about the need for U.S. Forces Korea to deter North Korea's conventional military threats even after the possible elimination of the regime's nuclear threat.

The commander said USFK will stay on the peninsula "until there is a peace treaty between all of the parties."

His response suggested that troop presence is necessary until a peace treaty comes but it may be reconsidered once such a treaty is signed. This led defense authorities in Seoul to seek clarification from Washington.

Amid controversy over his remarks, the U.S. Department of Defense conveyed its stance to Seoul on Thursday that USFK presence is irrelevant with the North Korea-U.S. dialogue on denuclearization, and that it has not discussed or has any plans to pull out or reduce U.S. troops in Korea in relation to a peace treaty.
Share
Print
List