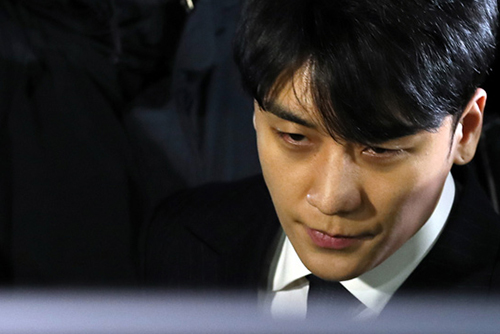 Police have booked former Big Bang member Seungri and Yoo In-suk, the head of Yuri Holdings for allegedly embezzling tens of millions of won from a pub they had co-owned with a group of K-pop singers.

According to the Seoul Metropolitan Police Agency on Monday, Seungri and Yoo were booked for allegedly embezzling funds from the club Monkey Museum which opened in Seoul's Gangnam district in 2016.

The police added that they are continuing to investigate the amount of money that was embezzled and where it was used.

Investigators also partially confirmed alleged prostitution solicitation by both Seungri and Yoo after questioning a number of people including four to five women.

They declined to comment on who ordered the prostitution, where the alleged sexual services were offered and what was given in return, due to the pending probe.

Police also booked a senior superintendent-level police officer surnamed Yoon, who is accused of colluding with Seungri and his friends and violating anti-graft laws after confirming he had accepted Big Bang concert tickets from Seungri.
Share
Print
List