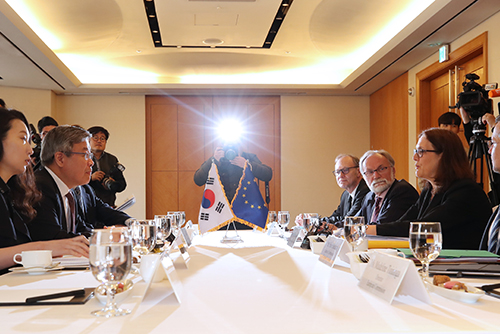 Anchor: The process to ratify a set of international labor conventions remains stuck in limbo because of intense disagreement among the involved parties, despite mounting pressure from the European Union for South Korea to ratify them in line with the free trade deal between Brussels and Seoul.
Choi You Sun reports.

Report: The four International Labor Organization(ILO) conventions, which South Korea has yet to ratify despite joining the UN body in 1991, concern the strengthening of basic labor rights such as guaranteeing individual rights to organize a group for self-representation.

The European Union has increased pressure on Seoul to ratify the conventions, saying it will launch an expert panel to review South Korea's compliance with a bilateral free trade agreement should it fail to ratify them soon.

President Moon Jae-in pledged to ratify the conventions during his election campaign.

A final proposal to ratify the conventions recently put forth by public interest members of the Presidential Economic, Social and Labor Council faced opposition from both the business community and labor unions.

The Council members suggested extending the period of labor-management agreements from the current two years to three, restricting individuals from occupying businesses during strikes and continuing the ban on hiring substitute workers during walkouts.

Claiming that many of their concerns were neglected, businesses said allowing dismissed workers to join the union and removing regulations on suspending wages for full-time union members would only exacerbate discord between labor and management.

Labor unions raised concerns over the extended agreement restricting their rights to bargain and strike.

With no prospect of a social agreement on ratifying the conventions, unions are urging the government to proceed in ratifying them first and then revising the relevant laws.

The government, however, rejected the proposal this week, saying it will wait for the presidential council and the National Assembly to reach social and political consensus on required legal revisions before proceeding.

The issue is also facing a deadlock among rival political parties, with the chairman of the parliamentary labor committee on Thursday saying the issue is even more controversial than raising the minimum wage.
Choi You Sun, KBS World Radio News.
Share
Print
List